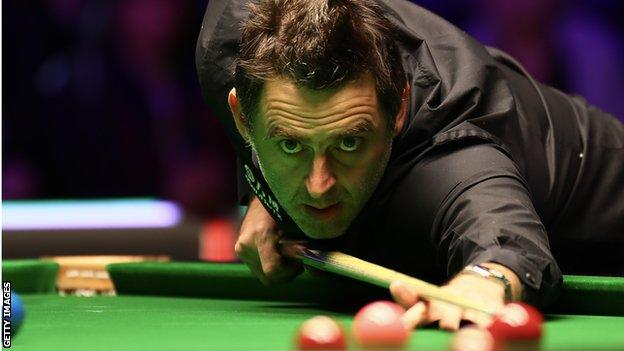 Ronnie O'Sullivan cruised into an 8-1 lead in his first-round match against Thailand's Thepchaiya Un-Nooh at the World Championship at the Crucible.

The five-time champion raced further ahead with breaks of 74, 88 and 76 before Un-Nooh won the seventh frame.

However, O'Sullivan took the next two frames to leave him needing two more to advance from Monday's final session.

It was a commanding performance from the Englishman, who clinically punished every error made by his opponent.

Un-Nooh, who potted just a single ball in the first three frames, struggled to get going and was guilty of some costly misses.

Until after he finally got on the board, he had looked vulnerable to becoming only the third player - after Eddie Charlton and Luo Honghao - to suffer a Crucible whitewash.

Higgins, who has reached the last three Crucible finals, had led 6-3 overnight and plays either David Gilbert or Kurt Maflin next.

China's Yan Bingtao raced to a 7-1 lead over English debutant Elliot Slessor in a match that will be concluded on Monday afternoon.

It was a demolition. Ronnie O'Sullivan was sublime all the way through. There will be stiffer opposition but if he maintains this form he will take a lot of stopping.

The lack of razzmatazz around the place is probably going to suit him, even just getting into the venue.

He is the biggest draw in the sport but there are no crowds outside and it is a lot less aggravation for him.

When you see him play that well you think there must be other factors in why he has not reached the final recently.