Why Did Hong Kong Delay Its Election — by a Year?

The government blames the pandemic. More likely, it was afraid to lose.

Mr. Cheung is a member of the Hong Kong Legislative Council. 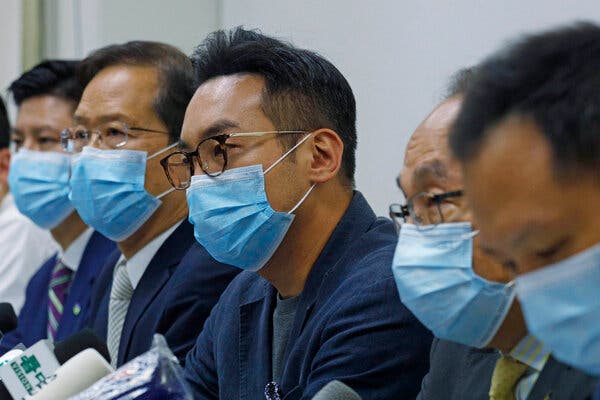 Members of the Civic Party at a news conference in Hong Kong on Thursday after 12 candidates were barred from running in the legislative election in September. The next day, the election was postponed.Credit...Kin Cheung/Associated Press

The Chinese Communist Party’s onslaught against the rights and the freedoms of the Hong Kong people continues. On June 30, it imposed on the city a new national security law. Within hours the police arrested people simply for possessing banners that said “Hong Kong Independence.”

On Thursday, the Hong Kong authorities disqualified 12 candidates from the pro-democracy camp, including four sitting legislators, from running in the election for the Legislative Council, known as LegCo, scheduled for early September: They questioned the candidates’ sincerity in pledging allegiance to the government.

An official government statement listed “expressing an objection in principle” to the new national security law as one of the grounds for disqualification — adding, “There is no question of any political censorship, restriction of the freedom of speech or deprivation of the right to stand for elections as alleged by some members of the community.”

And then on Friday, the Hong Kong authorities announced that the LegCo election would be delayed by a year.

They cited the coronavirus pandemic as an excuse, but the truth is that they are afraid their camp would lose the race.

Why else postpone the election so early before voting day? Or for so long? Over the past few months, elections were successfully held in South Korea, Tokyo and Singapore in the middle of coronavirus outbreaks.

The pro-government camp was humiliated in district council elections in November, when the opposition won 86 percent of contested seats. In mid-July more than 600,000 people turned up for informal primaries for the opposition camp — which Beijing’s representatives in the city later called “a serious provocation to the current election system.” Not wanting to lose another election, the pro-government forces have, in effect, canceled it.

And now this postponed election creates a dangerous legislative void — as well as a gutting dilemma for some of us who are pro-democracy members of LegCo.

Hong Kong’s election cycle is fixed: Under the Basic Law, the city’s mini-constitution, legislative elections are to be held every four years in September. The embattled chief executive, Carrie Lam, has conceded that this delay does not conform to the law — and so she is deferring to the Chinese government in Beijing to decide how a provisional Legislature here should operate.

It is not known whether that body will function as LegCo usually does, or if it will meet only in emergency situations. Even if LegCo’s current session is simply extended, its composition is now unclear: Will the sitting legislators who were disqualified from contesting the next election be allowed to continue to serve?

I am one of the 24 members of LegCo from the pro-democracy camp, out of a total of 70 legislators.

Throughout the years, our camp — which comprises different parties with different views, though all committed to democratic rights and freedoms — has received a majority of the popular vote for the seats decided by direct suffrage. But the Legislature’s design, which reserves 35 seats for special interest groups — many by now dominated or co-opted by pro-Beijing parties — has ensured that nonetheless we are a minority.

During LegCo’s current term, the government had already disqualified a total of six elected pro-democracy legislators, essentially arguing that their allegiance to the idea that Hong Kong is an integral part of China was in doubt.

If four more pro-democracy members of LegCo are ousted from the provisional Legislature, we will be reduced to less than one-third of the seats — the threshold for vetoing major bills, such as changes in the election system or decisions to impeach legislators.

So what should pro-democracy legislators do?

Do we boycott the interim Legislature in protest or in anticipation that if we participate, we will be run roughshod over — and adding our unwilling imprimatur to laws we oppose?

Or do we participate in a sham and do our best to stand our ground, knowing that if we don’t, grievous laws will be passed for sure?

In the lead-up to Hong Kong’s handover from Britain to China in 1997, a provisional Legislature was established to transition away from colonial-era institutions. Many saw it as undemocratic — its members were selected by a Beijing-appointed committee — and the pro-democracy camp at the time refused to take part.

Within a year and a half, that provisional LegCo had passed laws that restricted freedom of assembly and freedom of association, and it had repealed a law granting collective bargaining powers to trade unions. In 1997, it also passed the Legislative Council Ordinance, which helped create the unfair structural design of LegCo today.

What more evils will this next provisional Legislature do to Hong Kong? How can the Chinese Communist Party be prevented from passing laws to manipulate future elections here — perhaps even allowing people on the mainland to vote in them?

Beijing’s overarching intentions with Hong Kong are clear, and it’s also clear by now that the Hong Kong government is doing nothing but Beijing’s bidding.

Last week, the police arrested four students, ages 16 to 21, from a disbanded pro-independence group; under the new national security law, they could face a life sentence. On Friday, the Hong Kong authorities issued arrest warrants for six activists abroad, including one American citizen.

Academics affiliated with the democracy movement are being sacked by their universities. Independent media outlets are hounded. A popular satirical TV show produced by Hong Kong’s public broadcaster was terminated for mocking the police.

Officials are talking about revising the management of schools and the curriculum to promote patriotism and a sense of national identity.

Every way I turn, I see red lines being drawn. Anyone who dares to step over one will be heavily punished.

The Chinese Communist Party is well aware of the international outcry over what it is doing to Hong Kong. No matter; it presses on. Is that about saving face? Is China truly insecure about its national security? Does it want to change the world order? I can’t tell.

Whatever the motives, Hong Kong has become a battlefield for a contest between much larger forces, and the immediate casualties are the rule of law here and the rightful freedoms of the city’s people.

But all this only gives Hong Kongers more reason, and more conviction, to fight on, and defeat vested interests by defending our values.

Fernando Cheung is a member of the Hong Kong Legislative Council from the Labour Party.