[VIRAL] This Woman Says YES After a Skydive-Proposal From 13,000 Feet!

People are getting more creative when it comes to proposing to their beloved partners--just like this man. He took the wedding proposal into a whole new level after he and his girlfriend went skydiving from 13,000 feet. 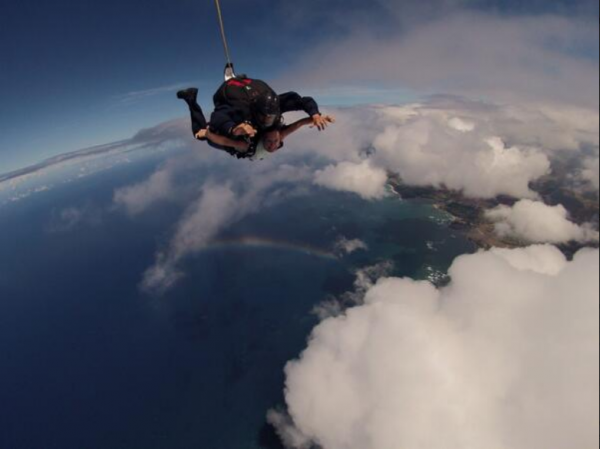 (Photo : Screenshot from Twitter post of @kimicojuangco)
This Man Takes Wedding Proposal Into a Whole New Level; She Says YES After the Skydiving-Proposal

Also Read: What Would Happen If An Alligator Inhales Helium? These Nobel Prize Scientists Would Show You

The ultimate romantic scene was planned by Jason Pack to make his girlfriend Katie Line's first-ever parachute jump an unforgettable one. He coordinated with the woman's family to hold giant letters and spell out "Katie Marry Me?" on the ground, which Katie eventually saw while they were gliding towards the bottom.

When they've reached the ground, the man runs to his partner with an engagement ring before getting down on one knee in front of the astonished woman. Pack got Line's sweet yes, then girl's family cheered and congratulated the soon-to-be-wed couple.

The adrenaline-pumping proposal was filmed sa the couple took part in a charity skydive at Sibson Aerodrome near Peterborough, Cambridgeshire, England, on Sept. 5.

"I then had the family on the ground with some large painted signs and then I just hoped for the best that Katie could read it from the air," said Pack.

The footage showed how the man rushed to her girlfriend after she landed, getting down on one knee to complete his romantic act.

"I think I just nodded my head to be honest. I think I was too shocked. It was amazing," said Line.

She added that she saw all the letters, as well as her boyfriend running towards her. Line also explained that the instructor kept asking her if she can read the sign, which at first, she thought he was referring to the road signs.

The skydive-proposal would be something the woman will never forget

When Line realized what was happening, she was shocked. She said that his boyfriend was very romantic and she was so impressed his plan went well.

The woman added that the proposal took her breath away and will be something she'll never forget. 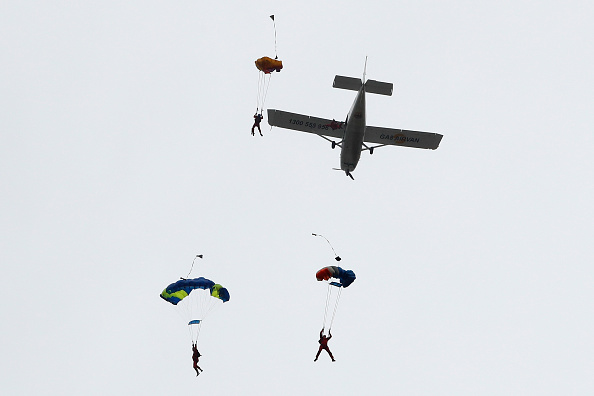 (Photo : Photo by Dylan Burns/AFL Photos via Getty Images)
MELBOURNE, AUSTRALIA - MARCH 08: Skydivers are seen during the 2020 Marsh Community Series match between the Collingwood Magpies and the St Kilda Saints at Morwell Reserve on March 08, 2020 in Melbourne, Australia.

The couple, who live in Wellingborough, Northamptonshire, and have three children, raised over $6,300 for Cransley Hospice in nearby Kettering. Pack and Line plan to get married in 2023, hoping that the coronavirus restriction would ease by then so that they could hold a big ceremony with friends and family.

Hearing your partner say yes would be one of the most memorable moments in your lifetime. But, you don't need to have an extravagant proposal to get her sweet yes. She'll say it once she's ready.