[VIRAL] Internet Bashes Police Dept. After Posting a 'Molotov' Made From Plastic Bottle; Here's Why It Wouldn't Work

Molotov cocktails are popular in the world of shooting games, especially on PUBG. Some players are even aware that it should be made from a 'glass' bottle.

However, a real-life Molotov made from "plastic bottles" was posted on Twitter by Portland Police's official account. Some Twitter users ridiculed the police department's tweet after seeing that the Molotov was made from a plastic bottle and a washcloth.

This is the second time Portland Police distributed photos of molotovs, which the defense journalist Kesley Atherton refers to as "Molotov mocktail." Gizmodo's report explained that there are only two options why the police department posted the photo. First, the Portland protesters don't know how to make a Molotov. Second, the department could be faking the whole thing.

On Monday, Sept. 21, the plastic Molotov was found at the Penumbra Kelly building after a group of protesters marched there from Laurelhurst Park. Portland Police accused the group of throwing objects from the parking lot.

However, the protesters dispersed themselves from the scene, although the police department didn't arrest them.

"One of the items thrown was identified by the Explosive Disposal Unit and Arson investigators as a viable Molotov cocktail," said the Portland Police, during a press release.

"The wick was lit and the device was thrown onto the property. Fortunately, the fire extinguished, and no one was injured," added the department.

Why plastic Molotov cocktails would not work

Molotov cocktail is an inexpensive weapon that simply requires a glass container with flammable liquid, like gasoline, inside. The top of the bottle should have a cloth sticking out to act as a fuse. 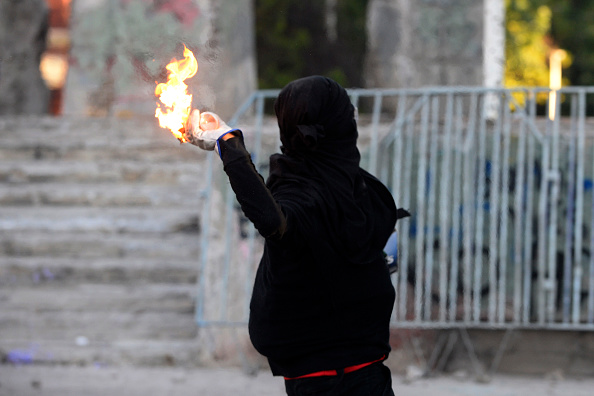 (Photo : Photo by Claudio Santana/Getty Images)
SANTIAGO, CHILE - FEBRUARY 7: A demonstrator throws a molotov cocktail during a protest against President Sebastian Piñera's policies and the police forces violence on February 7, 2020 in Santiago, Chile. Protests began again last week after a police truck ran over and killed a Colo Colo club fan after a match. Chileans have been taking the streets since October 18th when a subway fare increase triggered a fight against social and economic inequality.

The glass bottle is the most important part since it allows the flammable liquid to disperse properly when the Molotov was thrown on the ground or any intended target. If the Molotov's tip is lit, but not thrown, it would just simply burn out and not explode.

If a plastic bottle is used, the idea will not work since the plastic container would not shatter. It'll just melt slowly when the flammable liquid comes out.

It was also explained that most of the protesters around the globe are using glass bottles to make their own Molotov cocktails.

Also Read: [VIRAL] This Woman Says YES After a Skydive-Proposal From 13,000 Feet!