VIRAL: Among Us or Spacemen? Reddit's Halloween Costume Idea Can Also Protect You While Trick or Treating!

The year has brought the world on immense lockdowns and restrictions for mass gathering and public affairs, and with Halloween only a month away, a Redditor is giving an idea for people to be still protected and wear their costume of choice. This Halloween 2020, either go as a worker in Among Us, also closely resembling characters from Unfortunate Spacemen.

Halloween 2020 is more than a month away, but lockdown or quarantine protocols seem nowhere to be over as the Novel Coronavirus still sees a rise in infected cases and deaths in the country. The usual parties, trick or treating, and even going out at night for a spooky experience will be limited, or worse, be canceled. 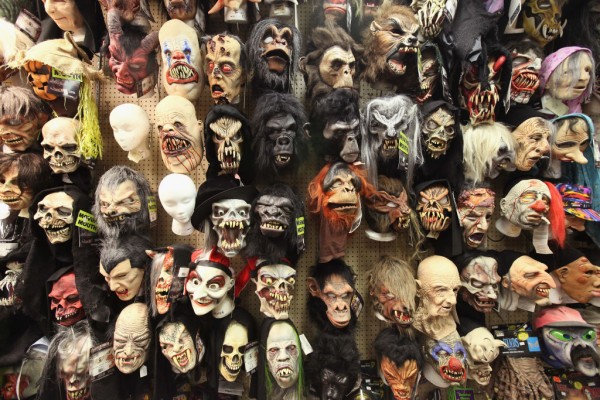 (Photo : (Photo by Scott Olson/Getty Images))
CHICAGO, IL - OCTOBER 28: Halloween masks are offered for sale at Fantasy Costumes on October 28, 2011 in Chicago, Illinois. The store, which had long lines at the registers at 4 AM this morning, is open around the clock through Halloween to help keep up with customer demand. Retailers nationwide are expecting record sales for Halloween merchandise this year with shoppers spending close to $7 billion dollars to celebrate the holiday.

With these in mind, several people will still try to dress up and embody their favorite characters or people to celebrate the festivities. It is essential to keep in mind that safety should always be the number one priority, with face masks, face shields, sanitizing products such as rubbing alcohol, and social distancing should be observed.

Already have an idea for a costume? Good. If not, here is a Redditor's entry for 2020's Halloween, inspired by the lockdown's hit game or a famous PC Steam game with a high 9/10 ranking.

Reddit's Halloween COVID-safe costume: Among Us or Unfortunate Spacemen?

Redditor u/raylolSW recently contributed an idea that shows four friends dressing up as the workers, both crewmate and impostor, in the hit mafia-style game, Innersloth's Among Us. The hit science-fiction game set on space's workstation shows little 'minion-like' characters that can be customized with in-game accessories and suit colors.

The best Halloween costume from r/gaming


While the post is intended for Among Us characters and costume, a Redditor named u/ FiveFive55 said that the outfit looks like it is from Steam's hit co-op, shapeshifting, and murder-betrayal game, Unfortunate Spacemen.

The hit action-adventure game is set on space, with a first-person POV gameplay, showing astronauts fighting-off threats in extra-terrestrial planets and monsters disguising as spacemen.

Among Us: Masquerade as Impostors or Crewmates this Halloween!

The Reddit post shows the iconic colors from the game, such as yellow, pink, white, and black. Among Us' costume is a spacesuit for the characters as they accomplish tasks around various cosmic locations and hopefully catch the impostor. However, the game only continues if the impostor succeeds in killing off every crewmate and evades 'walking-off-the-plank.'

The Redditor's post also captured the accessories of the spacemen from Among Us, with the likes of a 'Caution: Wet Floor' sign, a sticky note saying 'DUM,' and leaf above the helmet. The costumes also used full-body jumpsuits that seal the body from space's extreme conditions, matched with a full-face helmet.

Among Us' Virus Safe Costume 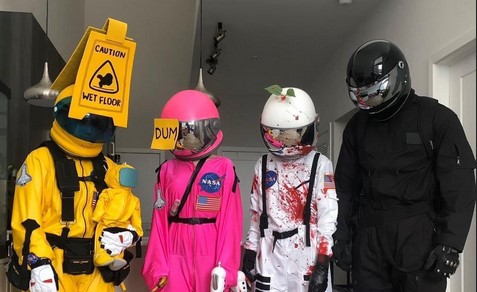 The suit will also be practical for Earth 2020 use, especially during this time of COVID-19. The full-body suit will prevent any airborne virus particles in the air from touching the skin, with hands completely gloved. The seeming motorcycle helmet also seals the face, complete with the visors that can prevent air and liquid from going inside through the nose and mouth.

The Halloween costume idea from Reddit makes it safe from not only crewmates and impostors but the notorious silent killer in real-life, the SARS-CoV 2 virus, or COVID-19.

ALSO READ: Genshin Impact's Release Time on PS4, iOS, and PC; Check Out If It Is Really Comparable With The Legend of Zelda: Breath of the Wild