They Lost Their Loved Ones To COVID-19. Then The Government Lost Their Remains.

A worker at a cemetery in Guayaquil.

Soraya Díaz had been waiting for this moment for two agonizing months.

On March 25, Díaz’s mother died in the hospital of what was likely COVID-19, which had cut a swathe through her city. Then, her body disappeared. Díaz was left despairing. Not only had she lost her 85-year-old mother, Enriqueta Razo, but the authorities then lost her body. Díaz was left with no way, or place, to grieve.

Then, on May 27, Díaz got a text message from a forensic anthropologist in the Ecuadorian city of Guayaquil who told her they had found her mother’s body and wanted her to go identify it. But when she went to meet him, expecting to be shown her mother’s cadaver, she found herself looking at photographs of the body on a computer screen.

Something’s not right, she thought. “I’m no doctor but if the bodies have been decomposing for so long, why do my mother’s cheeks still look rosy?”

Díaz demanded to see the physical remains, but the anthropologist, who analyzes human remains to determine their identity, told her that they had already been sent to the office in charge of forensic science. When she went there, employees waved her away, saying that her mother’s cadaver was at the prosecutor’s office. The body, Díaz recalled being told, wasn’t there either. Ninety-eight days after her mother died, Díaz has yet to recover her body, and give her a proper burial, albeit a socially distanced one.

Despite rising numbers of contagions, many parts of the world have begun loosening the lockdown restrictions and people are slowly returning to some kind of normalcy, streaming back into malls and bars. The pandemic, it seems to have been collectively and unofficially decided, is behind us now.

But for hundreds of families in Guayaquil, where disastrous state mismanagement led to bodies piling up on sidewalks and inside hospital corridors at the height of the crisis, the ordeal is far from over. At least 126 cadavers are still awaiting identification, stored in shipping containers at the National Service for Legal Medicine and Forensic Science’s Guayaquil office. On the surface, the city hums along almost to a pre-pandemic beat, but an unfortunate group of residents are left to stare at their phones inside malls, on public buses, and in their living rooms, compulsively refreshing a government page indicating the final resting place of COVID-19 victims, hoping to see the names of their loved ones appear on it.

For many of them, most of whom live in the city’s most impoverished neighborhoods, that moment may never come.

The others, by now, are decomposed beyond recognition.

A relative of a victim of the coronavirus cries next to a casket at the Hospital General del Guasmo Sur, April 4.

During the first days of April, a line of trucks holding empty coffins formed outside the Hospital General Guasmo Sur, Ecuador’s largest public hospital, as families waited to retrieve their dead relatives. Grief led to anger as the days stretched into nights and hospital staff refused to bring out the bodies.

At the hospital entrance, an employee saw a business opportunity in the desperate relatives. According to witnesses, he began telling people that for $300 he’d let them walk through the gates and retrieve their loved one’s body.

Díaz’s niece, Nayet Villota, volunteered to go in. The family agreed with the employee that they would only pay the $300 if they found the body and retrieved it. When Villota, 22, came back out, she was pale and visibly traumatized, said Díaz.

“It’s impossible,” Díaz remembered her saying as she described hundreds of bodies poking out of body bags heaped onto puddles of blood. Some were strewn across the hospital lawn and others were piled up inside shipping containers. People stepped on limp arms and legs as they frantically searched for their loved one amid the stench.

With only a handful of ambulances in the city, bodies were also rotting inside houses. Because of the countrywide curfew, people were forced to spend days next to infected corpses. Brokenhearted but fearful of the virus, many transferred the bodies to the street as 911 calls went unanswered.

When officials finally picked up the cadavers, they gave families a number with which to locate their loved ones on an online database. But, overwhelmed, these officials at times didn’t attach the identifying tags properly onto the body bags and many got lost. Soon, people began crisscrossing the city going from hospitals to morgues to cemeteries, begging to see the lists of the bodies that had been admitted to each.

There was such chaos that officials told some families that the remains of their missing relatives could be found in three different locations simultaneously, according to Viteri.

“There was the little box you had at home with ashes, the name on a tombstone, and the body that was lost in a shipping container,” said Viteri, meaning relatives were left confused whether they had their relative in their hands, if they were buried in a graveyard, or missing in a pile of bodies. As tension between the city and national governments boiled over, Viteri tweeted at Vice President Otto Sonnenholzner, demanding he reveal the location of the missing bodies.

Those who registered their missing relatives with the government awaited calls. Instead, they got messages on WhatsApp.

Roberto Escudero, one of three forensic anthropologists in the country, communicated with the families of many of the 216 bodies he was in charge of identifying through the messaging platform. His messages lit up their cellphone screens with questions about scars and tattoos, or the clothes their relatives were wearing the day they died.

The families and Escudero exchanged photographs of identifying physical marks to see if these were a match. His work, he said, was part science, part serendipity.

During a sleepless night last month, he turned on CNN in time to see the anchor interviewing a woman whose loved one had gone missing — Villota. A photograph came on the TV: It was Razo, Díaz’s mother. Escudero remembered working on a cadaver with a similar mole on her forehead and reached out to the family on Facebook.

Escudero talked to scores of distraught families around the clock. Even over the phone, “you could feel their pain,” Escudero said. “They call, they write, during the day, at night, at the crack of dawn.”

For weeks, it seemed like Escudero and his colleagues had hit a wall, and families of the missing grew restless. Corruption scandals erupted across the country: Prosecutors discovered a criminal ring that was selling body bags to hospitals at more than 12 times the real price; the prefect of Guayas, the province where Guayaquil is located, was arrested for corruption in the acquisition of medical supplies; and former president Abdalá Bucaram was taken into custody after authorities discovered thousands of coronavirus testing kits in his home.

These scandals made the families looking for the remains of their relatives even more distrustful of the authorities.

“With so much negligence, with so many lies, how am I supposed to believe them?” asked Marjorie Raza, whose 70-year-old father, José Gonzalo Raza, was hospitalized for what was likely COVID-19 on March 26 and has been missing ever since then.

After Raza, a tailor, got her father’s death certificate, she collected $200 from family members and asked for a $400 loan from an acquaintance to pay for his burial at one of the city’s cemeteries, including a coffin. For a moment, she grew hopeful that his body had been identified: One of the anthropologists called her to say they had found a man in his seventies wearing a white T-shirt, just like her father had been on the day she dropped him off at the hospital.

But when she saw the photo, Raza saw the emblem of a political party stitched on the T-shirt. It couldn’t have been her father.

Now, she’s waiting for officials to take a sample of her DNA and see if it matches any of the remains that have still not been identified.

“I feel humiliated. We were doubly hit: not given medical attention and not given the body of our father,” she said. “Imagine how I felt on Father’s Day.”

As the cases of missing bodies grew during March and April, Zaida Rovira, the vice president of Ecuador’s Ombudsman’s Office, began to collect their details.

Their stories added up to an image of absolute chaos across the city.

Alba Maruri Grande: Her family received a body allegedly belonging to Maruri and immediately cremated it. After a month with the ashes, health staff visited the family home and told them that Maruri was still alive, recovering in a local hospital.

Teófilo Velasco Ortiz: The family was not told that Velasco Ortiz had been moved from the Hospital General Guasmo Sur to a different hospital. Instead, medical staff told his family that he had died, and gave them a cadaver belonging to another patient.

Yin Reynaldo Barrezueta: After being diagnosed with COVID-19 and trying to get help at two different hospitals, Barrezueta died at home. Police took his body away, but didn’t tell his family where they planned on taking him. They then lost the cadaver.

The poorest communities were the most affected, said Rovira. Many of the people there don’t have the money to travel from the suburbs into the city to report a missing relative, so she said the number of misplaced bodies is likely higher than what’s been reported.

On May 18, Rovira filed a complaint against the ministries of health, defense, and the interior, the national police, the social security institute, and three public hospitals over the mismanagement of cadavers during the coronavirus crisis.

In it, she demanded that the state investigate the locations of the missing remains within 10 days, reimburse families for paid and unused burial expenses, provide psychological support to relatives, and issue a public apology to the victims’ families.

“We are fighting against the state’s most powerful institutions,” said Rovira, saying the lawsuit is unprecedented in Ecuador. “These families deserve to close the chapter and live out their grief.”

Several hearings for the lawsuit took place, with relatives testifying before a judge. Meanwhile, families staged sit-ins outside different government offices in Guayaquil. Many held up handmade posters with photographs of their missing loved one: “Where is his body?”

As the date of the final hearing neared, families said they began getting calls from the group of anthropologists, saying their loved one had been found and asking them to go in and identify them. They were surprised to be shown photographs rather than the remains themselves.

Last week, the judge who oversaw the hearings issued a ruling blaming the Ministry of Public Health, the Institute of Social Security, and the three hospitals named in the lawsuit for violating “the right to human dignity,” and called on them to issue a public apology. He also instructed the national police to return the bodies of the missing people to their families.

Many families were disappointed that several institutions, including the Ministry of the Interior, appeared to have been exonerated. And they worry that it is not yet clear how the government will return their loved ones’ bodies to them.

Díaz ruminates over this at home, alone. She wonders if the scientists who claimed to have identified her mother simply took a photograph from her Facebook page or social media and tweaked it a bit before showing it to her so she would let up her fight.

“What if I get ashes?” wondered Díaz during a recent call. “I’ll never be certain they belong to my mother.” ● 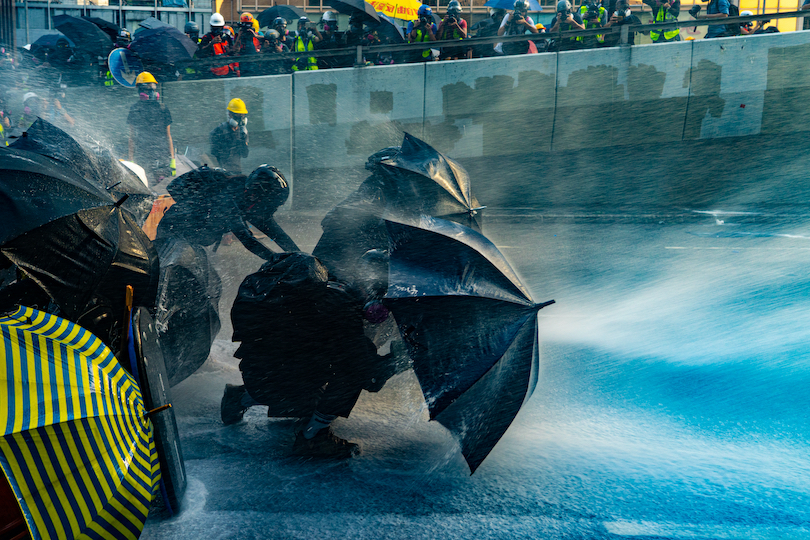 Brexit, Hong Kong and the Arab Spring: Voices of the People