The United States military is now using a drone missile called "ninja bomb" in Syria to reduce non-combatant deaths. Unlike other missiles, this one uses a 100lb of dense material and six attached blades.

(Photo : Photo by IDF via Getty Images)
SHIZAFON, ISRAEL - JUNE 05: In this handout photo distributed by the Israel Defense Forces (IDF) helicopters and tanks are mobilized as the Israeli army takes part in a military manoeuvre to conquer a Syrian outpost June 05, 2007 in Shizafon in the southern Israeli, Negev desert. The military exercise took place as the Middle East marked the 40th anniversary of the war which saw Israel defeat three Arab armies in six days but began four decades of occupation.

Ninja bombs are described as less likely to kill civilians. They were previously used a number of times to kill militants in Syria, including those who are connected to aal-Qaida. The drone missile is officially called as the "Hellfire AGM-114R9X." It is also named as R9X or "Flying Ginsu."

The U.S. Joint Special Operations Command has increasingly deployed in targeted assassinations. It was claimed that the ninja bomb was first used in 2017 to kill Abu Khayr al Masri, the 2nd leader of aal-Qaida, in Idlib province.

It received wider attention when the Wall Street Journal released an article in 2019, stating that the weapon only kills terrorists, not civilians.

The drone missile uses a force of 100lb of dense material, flying at high-speed. Once it is deployed, the six attached blades would fly out before impact, slicing and crushing the terrorists. 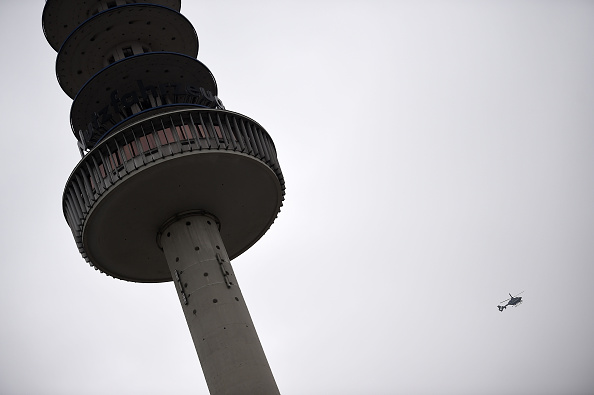 (Photo : Photo by Alexander Koerner/Getty Images)
HANOVER, GERMANY - NOVEMBER 15: A helicopter of the federal police observes left-wing protesters at the Central train station Hanover during a protest of Hooligans and other supporters of the HoGeSa movement protest against radical Islamists on November 15, 2014 in Hanover, Germany. HoGeSa, which stands for "Hooligans Gegen Salafisten," or "Hooligans Against Salafis", has brought football hooligans, right-wing populists and neo-Nazis together to ostensibly protest against Salafis in Germany, who are among the more radical Islamist immigrant groups and have been accused of supporting Islamic State violence in Syria.

In June 2019, the Syrian Observatory for Human Rights released footage that showed the missile's remains that struck a vehicle. The video also revealed how it killed the members of Hurras al-Din, a group affiliated with aal-Qaida.

It was speculated that the ninja bomb was developed during Barack Obama's administration when the U.S. policy for targeted drone assassinations attracted criticism because of civilian casualties. It was only used in small quantities in Syria when it was first deployed.

The New York Times reported that the missile's most recent use was on Sept. 14, when it was reportedly used to kill Sayyaf al-Tunis. Ninja bomb is the latest non-explosive version of the Hellfire missile. At first, the weapon was specifically designed as a tank destroyer that was used in Afghanistan. However, the U.S. military regarded the missile as not entirely suitable during that time.

For more news updates about the Ninja Bomb, always keep your tabs open here at TechTimes.