The T List: Five Things We Recommend This Week

A Croatian monastery turned hotel, a new show at the SculptureCenter — and more.

Welcome to the T List, a newsletter from the editors of T Magazine. Each week, we’re sharing things we’re eating, wearing, listening to or coveting now. Sign up here to find us in your inbox every Wednesday. You can always reach us at [email protected]. 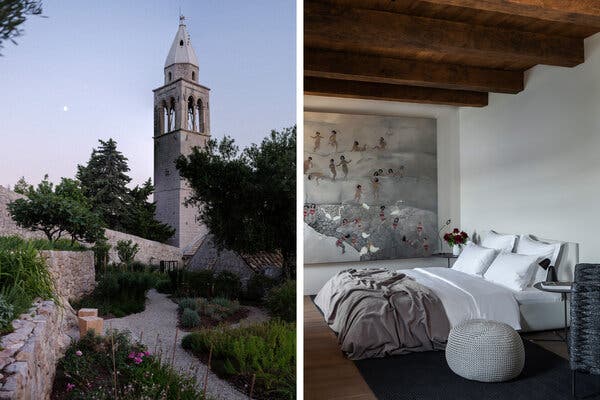 Left: architects and engineers retained the massive fortress that protects the monastery, even keeping some of the original plaster from the 16th century. Right: each of the property’s five suites features a range of artworks that the Thyssen-Bornemisza family has amassed over four generations, an impressive collection that spans between the 13th and 21st centuries and was once said to be the largest collection after the Queen of England’s.Credit...Courtesy of Lopud 1483

Several years ago, while the architect Frank Gehry was boating by a derelict 15th-century monastery on the island of Lopud in the Elaphiti Islands of Croatia, he convinced the fourth-generation art collector and philanthropist Francesca Thyssen-Bornemisza (of the Thyssen-Bornemisza National Museum, opposite the Prado in Madrid) to restore the former Franciscan treasure to its original grandeur. Collaborating with the Italian designer Paola Lenti and the Zagreb-based architect Rujana Markovic, Thyssen-Bornemisza embarked on a 20-year renovation of the 5,000-square-foot complex, originally constructed in 1483 as a cloistered sanctuary for contemplation and healing and abandoned in 1822. Now, with five luxurious hotel suites converted from 12 former monk chambers, Lopud 1483 is something of an oasis. It’s also home to one of the world’s greatest private collections of Renaissance and contemporary art, including works that once adorned Thyssen-Bornemisza’s family property in Lugano, Italy, as well as commissioned pieces by the artist Olafur Eliasson and the architect David Adjaye. Behind the property’s walls, guests can dine alfresco on local oysters and Dalmatian ham or stroll through the property’s extensive gardens, lined with rows of lemon and olive trees and over 80 species of plants inspired by the Franciscan monks’ traditional knowledge of medicinal herbs. lopud1483.com.

#QueerCorrespondence as a Form of Art

When the pandemic began, the London-based associate curator Eliel Jones, who works at Cell Project Space, started writing love letters to his boyfriend in Los Angeles. Jones came to see his correspondence as longing made tangible. Letter writing has a rich queer history, he observed, and often bridged the gulf between isolated individuals while reminding them of their distance. Enter Cell’s new mail art project, “Queer Correspondence.” Artists originally slated to showcase in the gallery this year were asked to correspond through letters and visual art, which would then be copied and mailed to a (now-full) list of over 800 global subscribers every month through December. In June, Alex Margo Arden and Caspar Heinemann shared a facsimile of a letter and a bottled scent. In July, Beatriz Cortez and Kang Seung Lee engaged with activist traditions of flyposting, and in August, Ezra Green and Martin Hansen bound emails and poems in a small purple booklet. Though Jones posts fragments of the work digitally and is considering eventually displaying it in the gallery, the project exists primarily for subscribers, who can share with and browse the hashtag #QueerCorrespondence on social media. As witnesses to queer intimacy, onlookers are twice removed from the source — right now, there’s no such thing as pure connection. cellprojects.org/exhibitions.

Opening this week at the SculptureCenter is “Imperfect List,” a new exhibition of work by the New York City-based, English-born artist Jesse Wine. Wine was interested in exploring the idea of sleep, especially as it functions in a capitalist society — “the more capitalism consumes the world, the less we get to sleep,” he told me — and his free-form ceramic figures consist of slumbering heads and limbs that appear to have been jolted awake. Wine also crafted a fleet of ceramic transport trucks, inspired by those he could hear idling outside his studio in Red Hook as he worked. It reminded him of the sleep function on a computer, he said, “where the machine is neither on nor off but in an intermediate state.” “Imperfect List” was supposed to open in May but was then postponed; Wine said that, in the intervening months, he returned to see the SculptureCenter’s garden overgrown as if it, too, had been busy while it slept. Inspired to include evidence of the garden’s growth alongside his exhibition, Wine added a tuft of a weed to one of his finished pieces. “I wouldn’t have noticed that normally. I wouldn’t have been slowing down,” he said of his pre-pandemic existence. There is much to admire in Wine’s ability to harness complex thoughts and quiet observations into gestures and figures that seem born from a more subconscious space. “Imperfect List” is on view at the SculptureCenter through Jan. 25, 2021, sculpture-center.org.

A Unisex Uniform From Georgia ic25

Season after season, the fashion industry takes larger strides toward a more gender-fluid understanding of clothes, breaking down old modes of thinking, including whether or not a garment belongs strictly to a man or a woman. The Los Angeles-based designer Maria Dora is unconcerned with such distinctions, leaving the clothes of Georgia ic25 completely undefined by gender. Inspired by studies of the artist couple Charles and Ray Eames, as well as the pioneering painter Georgia O’Keeffe, Georgia ic25 offers four modular pieces — a chore jacket, a five-pocket pant, an apron and a tank top — that are meant to be building blocks for a working artist’s uniform. So while Georgia ic25 offers functionality, it also evokes a moment in art history when the artist was both stylish and unconventional. Dora believes that the pieces are a kind of blank canvas for individuality — from there, Dora says, “It’s whatever the person wearing it wants it to be.” From $175, georgia-ic25.com.

Gluten-free diets may be trendy, but the Charlier family — who run a farm in Provence, France — has been eating that way for three generations, because of a history of celiac disease and wheat allergies. Now they’re helping others do the same: Last April, Chloé Charlier, 28, opened Breadblok in Santa Monica, Calif., which sells organic baguettes, brioches, shortbread cookies, crackers, croissants and other pastries — all made without wheat, soy, gums or refined sugar. And beginning this month, her most popular offerings will be available for nationwide delivery through Breadblok’s website. As someone who loves sourdough bread to the point of occasionally baking it myself, I have found that Charlier’s version — created with brown rice, buckwheat, tapioca, sorghum and coconut sugar, among other ingredients — is the only gluten-free loaf I’ve tried that mimics the tang, earthiness and airy crumb of the original. breadblok.com. 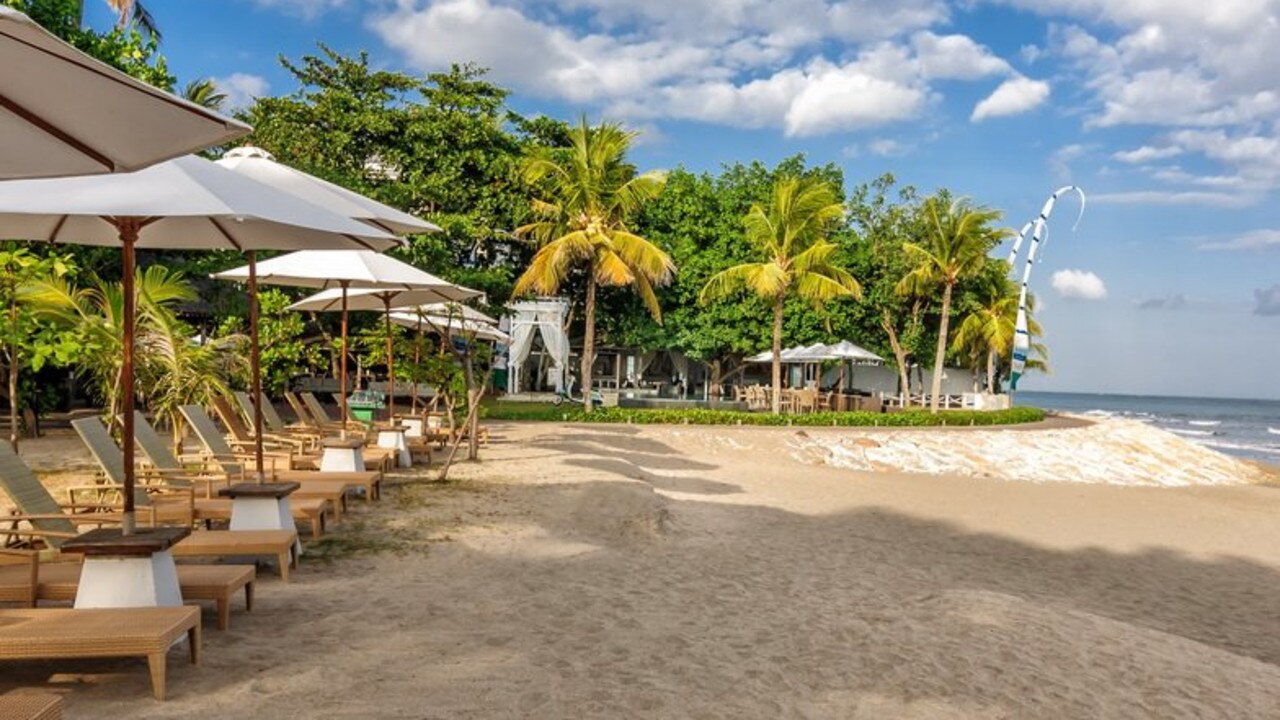 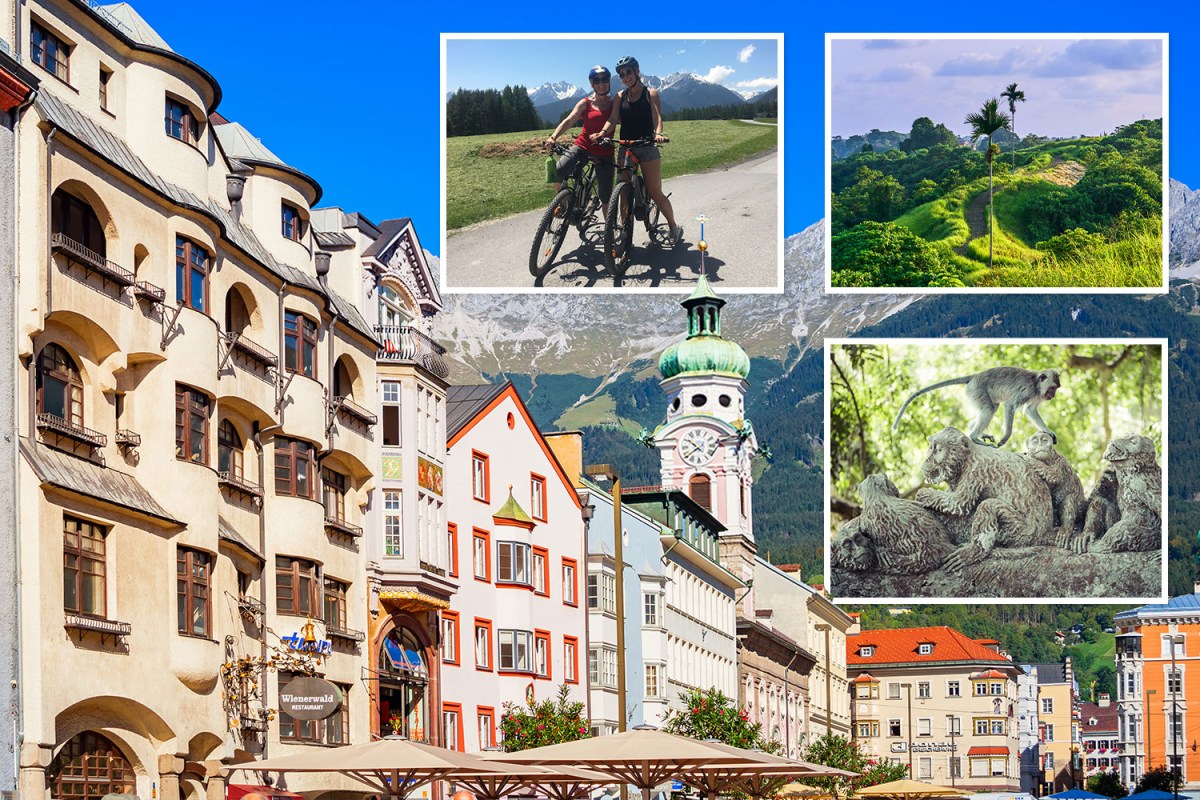