BARRE, Vermont — On the first Friday in June, Jefrey Cameron, 29, left his home around midnight to buy heroin. He had been struggling with addiction for seven years but had seemingly turned a corner, holding down a job that he loved at Basil’s Pizzeria, driving his teenage sister to the mall to go shopping and sharing a home with his grandmother. But then the coronavirus pandemic hit.

When he returned home that night and tried the product, it was so potent that he fell and hit his head in the bathroom. Mr. Cameron texted a friend soon after, saying that he had messed up and would go to a 12-step meeting with a friend that weekend.

“I promise I’m good and I can’t get in any more trouble tonight,” he wrote. “Sweet dreams, if you wake up before you hear from me definitely call me. The sooner I get up and into town the better.” When Mr. Cameron woke up, he used the rest of the powder — largely fentanyl, not heroin, his family would later learn — from a small bag with a bunny stamped on it. Less than five hours after he sent the text, his grandmother found him dead.

In the six months since Covid-19 brought the nation to a standstill, the opioid epidemic has taken a sharp turn for the worse. More than 40 states have recorded increases in opioid-related deaths since the pandemic began, according to the American Medical Association. In Arkansas, the use of Narcan, an overdose-reversing drug, has tripled. Jacksonville, Fla., has seen a 40 percent increase in overdose-related calls. In March alone, York County in Pennsylvania recorded three times more overdose deaths than normal.

For Mr. Cameron, the shutdown of daily life in the spring not only led him back to drugs, but led him to use alone — an especially dangerous proposition.

“Usually he would use with somebody, especially if it’s a different dealer or different batch,” said his mother, Tara Reil. “I don’t think he had that person to use with, to have that safety net.”

Mr. Cameron lived in East Barre, a tiny town about 20 minutes outside of the state capital, Montpelier. He drove a red Subaru Legacy, had a pet snake named Lucy and was passionate about making food for others. For two days after he died, the pizza shop he worked for closed its doors; now his pictures plaster the windows and customers can buy car decals, T-shirts and bracelets made in his memory.

When Vermont shut down in March, so did Mr. Cameron’s job, which provided his biggest support network. He was lonely and had money to spare: the $600 per week he received in extra unemployment benefits from the federal government was more than he earned from his job.

“Jefrey hated being alone. And the last couple of weeks, he was,” said Ms. Reil, who is 47. His grandmother had gone to Atlanta to visit her other children and had delayed flying home for fear of catching Covid-19. In her absence, Mr. Cameron started keeping the television tuned to her favorite channel, blaring Western movies and “Bonanza” reruns.

“He was home alone a lot more,” Ms. Reil said. “And I think the drug became his friend.”

Mr. Cameron had stopped taking Suboxone, a medication that helps suppress the cravings and withdrawal symptoms that plague people addicted to opioids, last fall; it has been found to sharply reduce the risk of dying from an overdose, but he had grown tired of taking it after three years, his mother said. 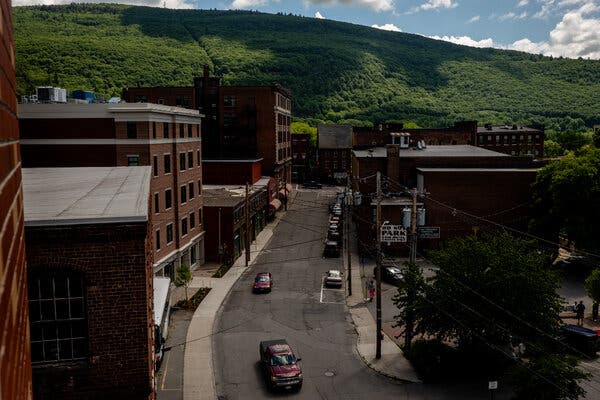 Battleboro, in Vermont’s southernmost county, which also has the state’s highest rate of opioid use.

Opioid addiction has been a scourge in Vermont for more than two decades. When dealers and illegal drug organizations realized they could charge more for narcotics here than they could in nearby cities such as Boston, New York or Montreal, the market was flooded. As the painkillers that many young Vermonters became addicted to in the early 2000s grew harder to get starting about a decade ago, heroin moved in. Then came fentanyl, which is far more potent and has driven up deaths in almost every corner of the country.

Last year, after aggressive efforts to expand access to treatment, Vermont saw its first decrease in opioid-related deaths since 2014; that year, then-Gov. Peter Shumlin devoted his entire State of the State Message to what he called “a full-blown heroin crisis” gripping Vermont. But Vermont saw 82 opioid overdoses through July of this year, up from 60 during the same period last year.

Nowhere in the state is as hard hit as Windham County, which borders New Hampshire and Massachusetts and typically has the highest yearly number of opioid-related deaths. In the first three months of this year, emergency workers in Brattleboro, the county seat, responded to 10 overdose calls, none of them fatal. But by August they had responded to a total of 53 overdoses, including seven that were fatal.

“When this all initiated, it shot up,” said Lt. Adam Petlock of the Brattleboro Police Department.

Before the pandemic, Lieutenant Petlock and a trained civilian addiction counselor would bring Narcan and information packets to drug users and homeless people every two weeks through a program called Project CARE. Health and safety concerns prevented them from conducting the wellness checks during the peak of the shutdown, but they recently restarted the program.

While most businesses in the county closed in March, the Brattleboro Retreat, a psychiatric and addiction treatment hospital, remained open. It was able to stockpile hand sanitizer and protective gear, and even created a 22-bed, negative-pressure unit so it could accommodate coronavirus patients in the event of an outbreak.

An unoccupied room at the Brattleboro Retreat. The facility was able to remain open during the pandemic’s peak in the state earlier this year.

But in order to be admitted, patients have to test negative for Covid-19 — a potentially deadly setback for some who are unable or unwilling to wait several days for results.

Far more common than inpatient addiction care is treatment with three medications that help suppress the cravings and withdrawal symptoms that plague people addicted to opioids. Vermont has gone further than most states in expanding access to medication-assisted treatment, as it is known; at least 8,960 residents — about 1.5 percent of the state’s population — were taking one of the three medications, buprenorphine, methadone and naltrexone, during the first quarter of this year.

Once the pandemic began, the federal government tried to make it easier for patients to stay on these medications while doctors’ offices and clinics were generally closed and people were being asked to stay home. Nik Rowley, 37, has been taking a daily dose of Suboxone — a brand name for buprenorphine — for about eight years.

Typically, Mr. Rowley has to go see a doctor every two weeks to get 38 doses of Suboxone — two per day. “What they started doing was emergency exemption doses. So you were getting a month’s worth of emergency doses,” he said.

Nik Rowley lived in government-assisted hotels during the pandemic, and now lives with a friend on the condition that he stay sober and help around the house. He takes buprenorphine daily.

Mr. Rowley was getting back on his feet after being hospitalized for pneumonia when the pandemic hit. With nowhere else to go, he found housing in a hotel through a state-funded program to keep residents off the streets. The extra supply of medication helped him avoid drugs, but in his hotel room, he relapsed on alcohol. “I had a few beers at the hotel because you’re stuck in a room all by yourself,” he said. “You have nothing to do. So all you do is sit there and ruminate and your depression gets worse.”

Brattleboro has several hotels that the state helped convert into temporary housing units for homeless and other at-risk people. Groundworks, a year-round housing service in Windham County, typically places 33 people in hotels during the winter months; in the spring, the number swelled to 150.

Many of the recent lethal overdoses in the town have taken place at those hotels. “We immediately saw a skyrocket in the amount of substances that people were using,” says Rhianna Kendrick, director of operations for Groundworks.

Nick Luoma, a heroin user who has been living in one of the hotels, said several people who had overdosed during the pandemic had relapsed after it began. “I get it — like, what are you going to do?” said Mr. Luoma, who is 35.

When he got housed at a hotel in late March he was using less than a bag of heroin a day, but his use has gone up. Despite efforts to stop — he briefly tried medication-assisted treatment — he accidentally overdosed twice in July. “I am not honoring some of the parts of myself that have so much potential,” Mr. Luoma wrote in a text message that month.

“Last night I almost died again,” he wrote. “I may have to wait 2-3 weeks to get into rehab. I’m fortunate to have the folks from Groundworks willing to find ways to help me through this waiting period, but the nagging urge, the beast inside that sits waiting for a moment of weakness could kill me before I am able to get in.”

Not all drug-related deaths during the pandemic have been from overdoses. Jessie-Mae DeCosta, 32, died from sepsis, an infection she got from injecting drugs. “Covid kind of sealed Jessie’s fate,” said her mother, LaNell DeCosta, 62, of Bristol, Vt.

Ms. DeCosta had struggled with drug use for a decade and was living with her mother, and three cats she had rescued, until the shutdown began. Afraid that she might expose her mother to the virus, she moved into a house with some friends where they all were using drugs. Already in poor health, with abscesses covering much of her body, she started feeling worse than usual in May and assumed she had Covid-19. But past experiences in hospitals, including one long stay when she was treated poorly by doctors and nurses because of her addiction, made her avoid seeking care.

Ms. DeCosta, like so many other grieving family members and friends of people who have died during the pandemic, grapples with how to say goodbye to her only daughter. Because of the pandemic, she has put off holding a funeral or memorial service. “It’s denied me closure, and I think it denied her boyfriend closure, denied her dad closure, denied everyone who loved her,” Ms. DeCosta said. “Because no one could say or show their last respects to her.”

The Reil family decided to wait over a month after Mr. Cameron died to hold a service. On a bright and humid afternoon in July, more than 80 friends and family members came together at St. Sylvester’s Catholic Cemetery in Barre to mourn him.

“Our hearts break, our heads shake at the injustice of yet another young life extinguished by the disease of addiction,” Pastor Rachel Fraumann said after beginning her service with a strong warning for mourners to stay as distant from one another as possible. “I don’t want to do a bunch of funerals on the heels of this one.”

Tara Reil and her four surviving children sat in white folding chairs with masks, tissues and water bottles handy. Two of Mr. Cameron’s brothers had flown in from out of state, taking leave from their posts in the Marine Corps and Navy.

Six family members spoke, including Mr. Cameron’s stepfather, Terry Reil. “Let Jef’s purpose empower you to make a difference in yours or someone else’s life,” he said, “to do good things in this world or just let someone you know, know you care about them.”