No one managed to hit .400 this year despite excited speculation about the possibility in a truncated season, underscoring how impressive Suzuki’s late-season stretch in 2004 was. 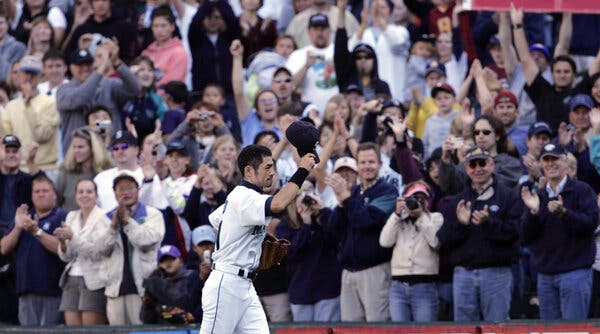 Ichiro Suzuki during the final game of the 2004 regular season, in which he broke the season hits record and hit .460 across a 60-game stretch.Credit...Elaine Thompson/Associated Press

After Charlie Blackmon of the Colorado Rockies completed a stretch of six consecutive multiple-hit games in August, his batting average ballooned to an even .500 after 17 games. Nolan Arenado marveled at his teammate’s otherworldliness.

“The zone you dream of,” Arenado said at the time, “is the one he’s in right now.”

Blackmon’s blistering start this season — and a similar streak by D.J. LeMahieu of the Yankees — spurred excited speculation as to whether this pandemic-shortened season could produce the first .400 batting average since Ted Williams hit .406 in 1941.

Ultimately, it did not. LeMahieu led the majors with a .356 average entering the season’s final weekend, while Blackmon had slid to .308 — apparently unable to stay in “the zone,” that state of mystifying excellence that players like Arenado often use to explain a hot streak.

The drop-off, though, cast a renewed appreciation for Williams’s performance over more than twice as many games. It also underscored the brilliance of the best 60-game stretch in this century — a feat accomplished by a player who rejected the entire concept of being in any sort of “zone.”

“I can’t relate to that,” Ichiro Suzuki said when asked about “the zone” in August 2004, as he was on his way to breaking George Sisler’s single-season hits record from 1920. “That sounds like a cop-out, or something I might have said early in my career when I didn’t understand why my swing produced certain results. Now, I feel I always understand the reason, and if I don’t, I have the means to search until I do.”

Suzuki’s performance for the Seattle Mariners that year at age 30 produced 262 hits — still a Major League Baseball record for a season — and a .372 batting average, the best mark this century.

Suzuki’s astounding stretch started innocuously enough, with two singles in a ho-hum, 9-6 loss to the Texas Rangers on the last day of June. It wasn’t until two late-July series against the Anaheim Angels, his division nemesis, that it became obvious something special was brewing.

But this time the tactics were of no use: He tormented the Angels with 15 hits and 10 runs.

“We identified some spots where we had to throw the ball to him, and over the years of playing him, we set our infield to where we thought he would hit the ball,” said Black, the Colorado Rockies’ manager who was the Angels’ pitching coach at the time. “We had some overall success against him, except for the summer of 2004.” 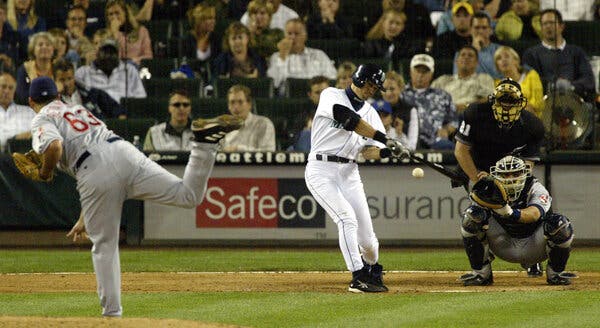 Suzuki slightly tweaked his batting stance in late June, an adjustment that he said propelled him to his hot streak. Credit...Ted S. Warren/Associated Press

Unlike Blackmon and LeMahieu, though, Suzuki did not start the season on a tear. He was dissatisfied with his first-half performance, and later revealed that his search for answers produced a eureka moment during that Texas series in late June.

While awaiting his turn at the batting cage before a game, he experimented, slightly repositioning his front foot and gently narrowing his stance. Intrigued, he carried the changes into the game and liked the feeling even more.

“I’m the kind of batter who tracks the ball on a line, so how quickly I can enter that plane is crucial,” he said after the season. “As the ball comes toward me, first my eyes and then my entire body enter the line. My bat is the last to enter it. By tweaking my stance, I was able to get my bat into the line quicker and more accurately.”

Adjustments like the one Suzuki made midseason, Black said, are a big factor in making a player great instead of just good. Those hoping LeMahieu or Blackmon could maintain .400 for this unusual 60-game season were discounting how the truncated schedule would make those in-season tweaks more difficult.

“When you’re talking a 60-game season as opposed to a 60-game stretch in a season, there’s a difference,” Black said. “Players are conditioned to play 162 games, and there’s a rhythm to that. Here, the at-bats become more critical because of the importance of the games, and that can have a tendency to take you out of rhythm.”

Indeed, Suzuki had the opposite challenge in 2004: fighting off indifference. By the time his tinkering was complete, the Mariners were out of the postseason race. As apathy settled in the clubhouse, Suzuki had to lean on internal motivation.

He went 6 for 6 in a doubleheader at Baltimore on Aug. 3, putting him atop the batting race for the first time with a .355 average. Across the field, Orioles third baseman Melvin Mora was fighting for the American League batting title with a career year. He seemed to concede the race after watching Suzuki’s perfect day.

“What can I tell you?” Mora said at the time. “He’s smart, he can hit, run, throw, defend, everything. He’s the best. How can you compete with this guy?”

“Batting is like a living thing,” Suzuki said. “It continually evolves in response to changes in your body and your surroundings.”Credit...Elaine Thompson/Associated Press

A home run on Aug. 26 gave Suzuki 200 hits for the season and left him 58 hits from surpassing Sisler’s hallowed record with 36 games to go. Suzuki remained steadfast as international attention swirled around him.

“Go ahead,” he told the Japanese news media. “I can’t stop you from anticipating it, but I’m going to approach it by setting short-term goals. 257? I look forward to it becoming tangible.”

Suzuki’s most memorable performance of that stretch came in Game No. 60, against the White Sox in Chicago on Sept. 4. He stepped to the plate in the seventh inning, already 3 for 3 against Mark Buehrle. Chicago’s ace lefty started him off by lofting a 66-m.p.h. eephus pitch.

Suzuki took it with a smile, and then drove the third pitch to center for a run-scoring single. Buehrle playfully turned to first base and doffed his cap as a sign of surrender. Suzuki laughed sheepishly.

In the ninth inning, a single to right field capped a 5-for-5 night and drew a standing ovation from the opposing crowd of 24,191. Suzuki stood at 223 hits through 135 games, 120 of them coming over the last 60 games.

Suzuki collected 39 more hits in the Mariners’ remaining 27 games to establish the single-season record of 262. His finish was still torrid, but not quite as scorching as those 60 games in which he had three five-hit games and went hitless for a game just six times, never in consecutive games.

For a player who refutes the notion that he entered some kind of extraterrestrial zone to achieve his record-setting performance, Suzuki also had a unique explanation for the challenges of maintaining his peak condition.

“Batting is like a living thing,” he once explained. “It continually evolves in response to changes in your body and your surroundings, and you must always stay attuned to feeding the needs those changes require.”