There has been a continuously rising attention devoted by American and European policymakers to the Big Five tech giants: Alphabet, Amazon, Apple, Facebook and Microsoft. Regulators are increasingly worried about the size of these companies and their potentially negative effects on market competition. On 29 July 2020, for the first time in history, the CEOs of Alphabet, Amazon, Apple and Facebook faced an antitrust hearing together in the American Congress (The Economist, 2020). They were asked to respond to various charges of anti-competitive behaviour. Apple had to justify the 30% fee charged on its on-line store. Google, instead, had to defend from the accusation of abuse of dominance related to online advertising. Amazon responded of an unfair use of merchant data. Finally, Facebook was summoned for the take-over of Instagram. At the same time, Slack Technologies filed a competition complaint with the European Commission against Microsoft (ibid).

Albeit proposing different approaches, both the American Republican and Democratic parties express a bipartisan concern over big tech companies (Lee and Shubber 2020). On the other side of the Atlantic, however, it seems that policymakers want to take a step further. Europe, France and the Netherlands have proposed a document to the European Commission, which highlights the necessity to take actions against tech giants (Espinoza and Khan 2020). Such a document includes, among the various actions proposed, the possibility of adrastic “breaking up” of these companies. Overall, the declining competition in the US has been documented by several studies across multiple sectors and using different measures (e.g. Gutierrez and Philippon 2018, Autor et al. 2020, De Loecker et al. 2020). Nevertheless, these papers implemented a multiple sector analysis without focusing on tech corporations specifically. In this context, this brief article attempts to partially fill this gap by presenting data on the Big Five and the industries in which they operate.

Figure 1 illustrates the relative changes of the sales share of the four largest firms in a given industry (CR4 indicator). As we can see, concentration has risen in industries where the Big Five belong apart from Facebook. 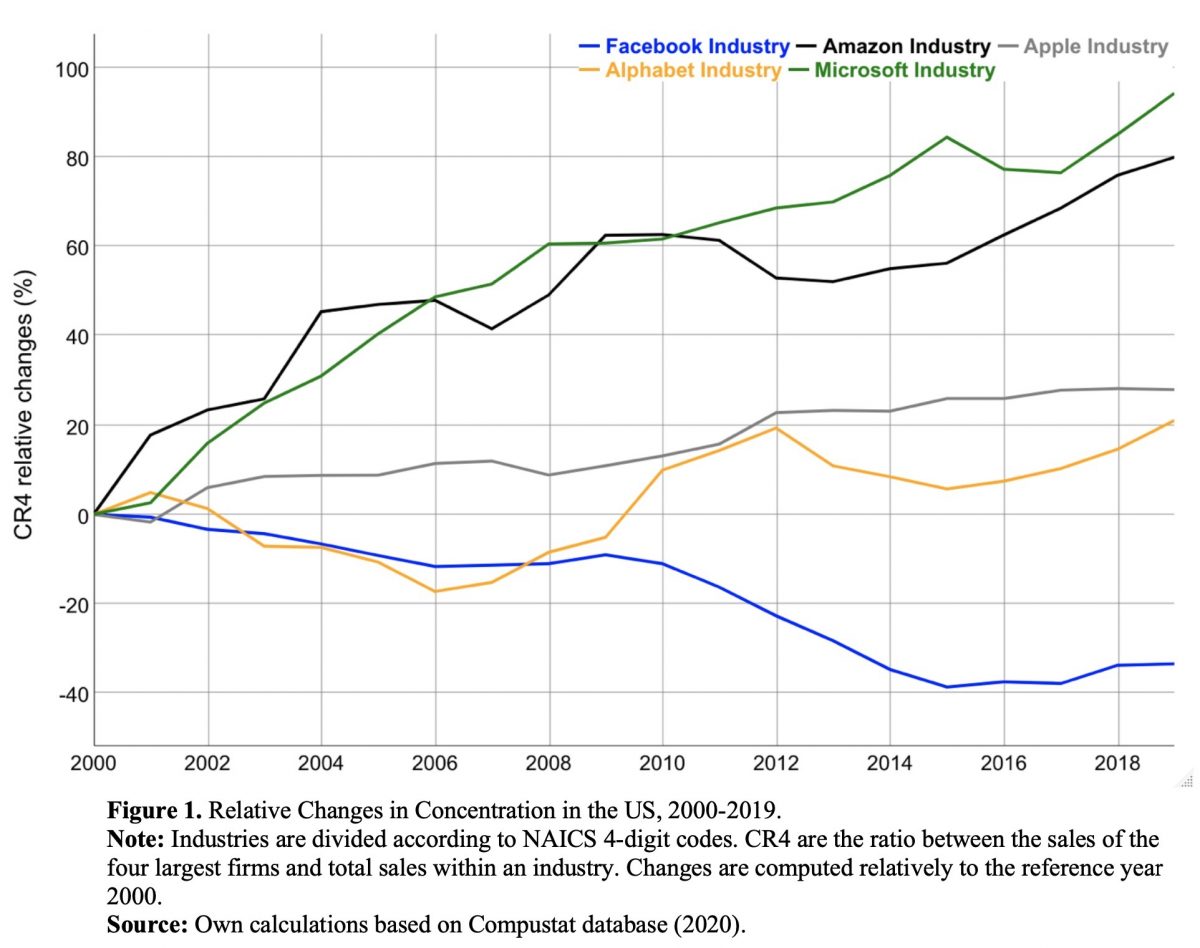 At the individual firm level, the Big Five’s market shares have risen sharply (Figure 2.). In 2019, their market shares are substantially large, particularly in the case of Apple, which generates nearly the 75% of its industry sales. These data indicate that the industries analysed resemble more oligopolies than competitive markets. For this reason, these trends should sound as a first alarm bell for regulators. 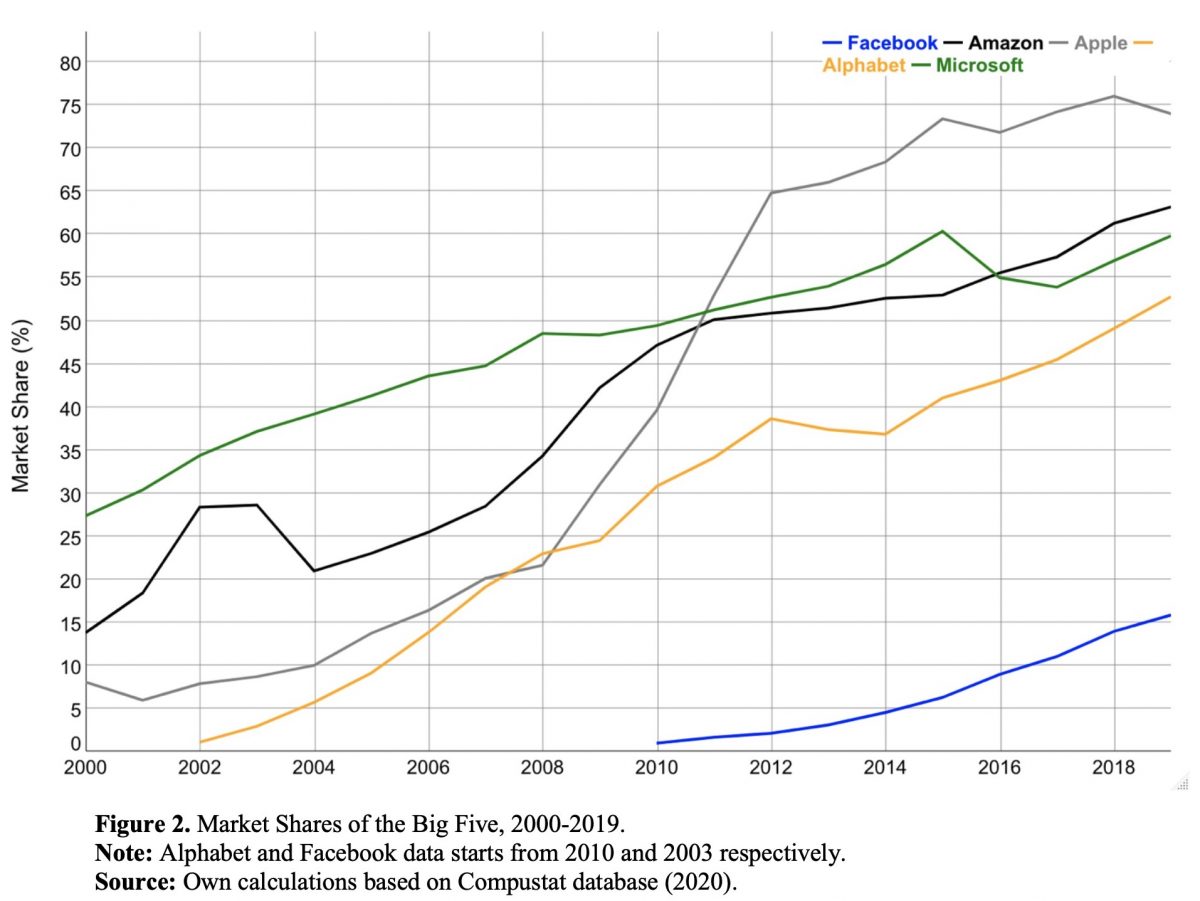 Industry concentration, however, is only a measure of competition which needs to be examined in conjunction with other statistics. Another commonly used measure to assess firms’ market power is markups, computed as the ratio between prices and marginal costs. In an ideal perfectly competitive market, where firms are price taker, prices are equal to marginal costs and therefore markups are equal to one. Clearly, the perfectly competitive market of classical economics is more an abstraction than a reality, but still markups are valid indicators to grasp the market power of large corporations. 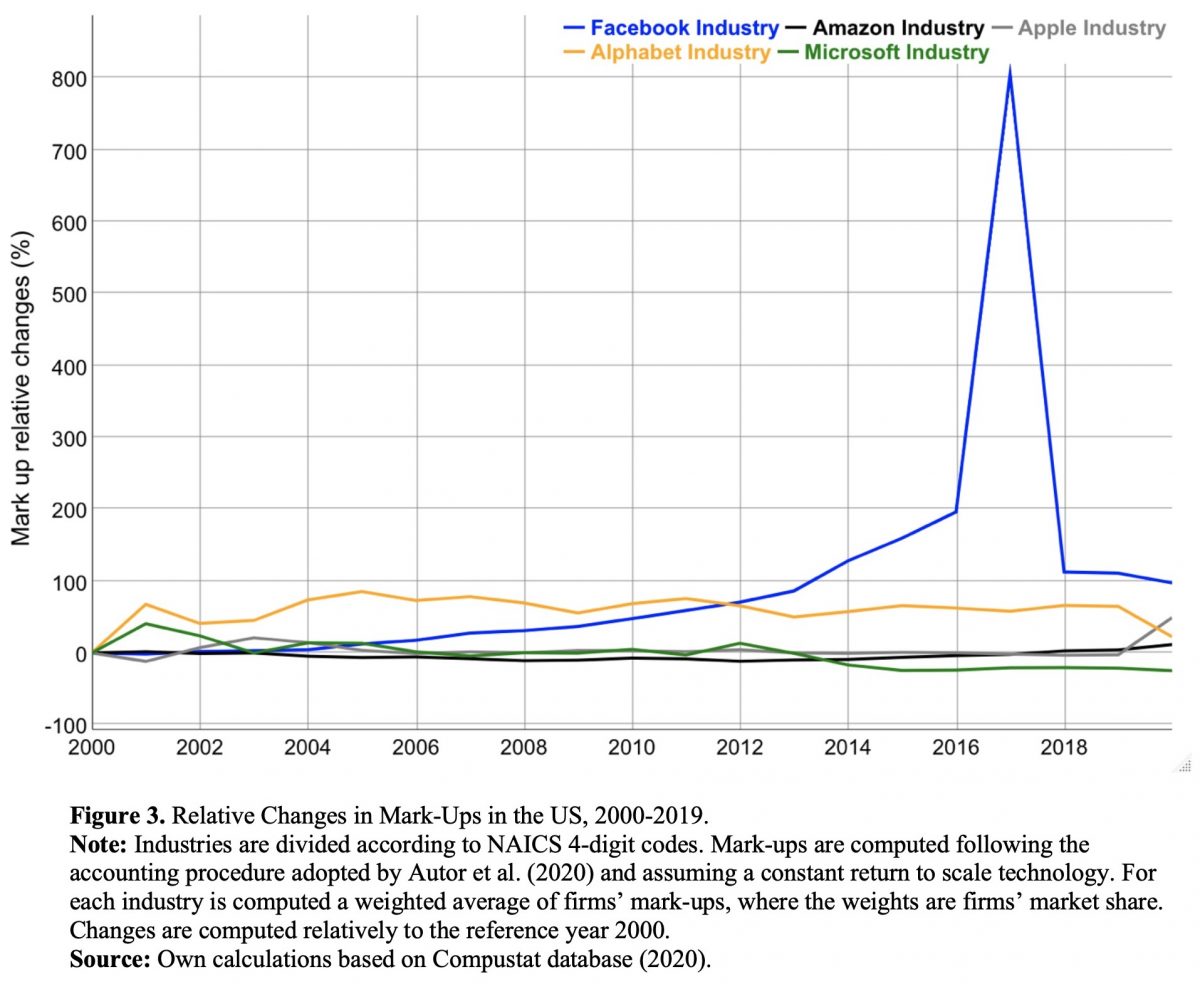 In the industries where Amazon and Apple operate, markups have remained relatively stable throughout the period considered, while they have eventually declined in the Microsoft’s one. On the contrary, in the case of Alphabet’s industry, we observe an initial increase in markups and then a relatively stable behaviour. The most surprising case is perhaps the one of Facebook, where the relative change in markups reached a peak of more than 800% in 2017 after a continuous rise. Not surprisingly, given their relative weight, the trends in mark-ups for the Big Five corporations reflect the industry-wide one (Figure 4.). In a nutshell, the picture, from the perspective of mark ups, appears to be less dramatic in terms of competition, than the one which emerges from analysing concentration and market shares. 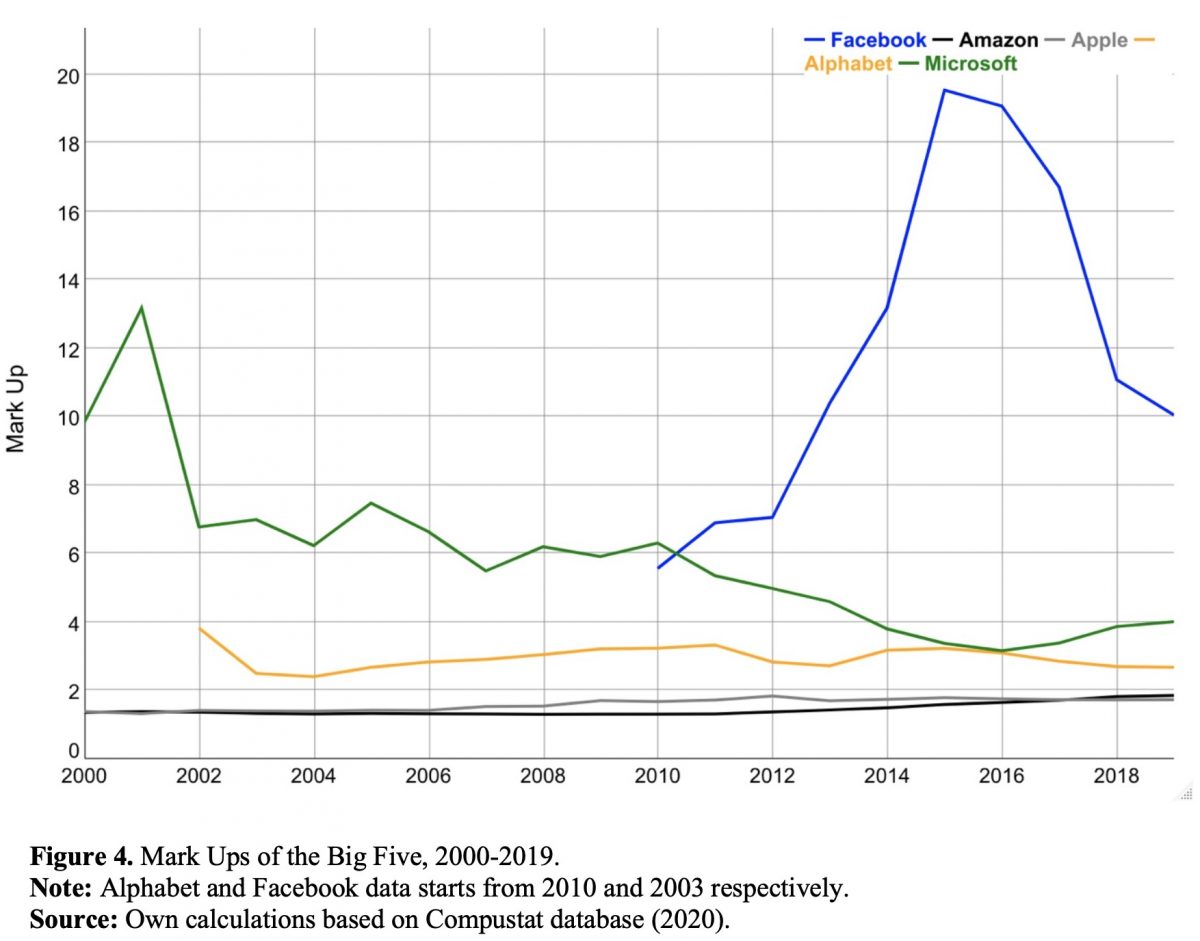 The question arising naturally is: how should regulators react to this data? Moving away from pure economics theory, the answer is far from being univocal, and it depends on the preferences shaping the views of the policymakers of the time. Broadly speaking, it is possible to classify regulators’ preferences for antitrust and competition policy into two macro categories: firm-based and market based. Such ideal categories of preferences are not fixed and can switch over time (Peinert 2020).  The firm-based approach, which derives from the so-called Chicago tradition, does not see industry concentration as a problem per se, as long as consumers’ welfare is not harmed (Ergen and Kohl 2019). Building on this tradition, it follows that policymakers’ intervention should be guided more by changes in mark ups rather than concentration indexes. The reason stems directly from one of the milestones of economics: The First Welfare Theorem. Since society’s welfare is maximised in a world of price-taking firms, earning zero profits, the higher the markups the further we are from the Pareto optimum, whereby the lower is consumers’ welfare. On the other hand, the market-based approach, also called Ordoliberal, is concerned in maintaining free and competitive markets, ideally populated by few very large firms and by many small-medium enterprises, thereby enhancing the principles of economic freedom (ibid). It follows logically that under these preferences high industry concentration and large market shares are reason to intervene.

Arguably, these different approaches constitute the Atlantic divide existing between American and European policymakers: the former pursuing the firm-based approach, whereas the latter the market-based one. The American firm-based approach can be reflected in the more lenient orientation of US regulators towards big businesses and the laxer blocking of dominance mergers with respect to European counterparts (Kwoka and White 2008, Bergman et al. 2010). Indeed, during the Bush administration American antitrust law has been relaxed and the Department of Justice changed its guidelines to make more difficult to sue large corporations for anticompetitive actions (Cassidy 2013). Instead, the market-oriented approach of European authorities can be found in the more aggressive antitrust policies as against large tech companies, exemplified by the Google Shopping decision of the European Commission, wherein Google was fined for its abuse of dominance (Portuese 2020). What is interesting to note is that both approaches belong to the Neoliberal thought, but, at the same time, they reflect an internal contradiction at the core of this school. A laissez-fair attitude towards businesses, an axiom of Neoliberalism, allows market concentration to rise, thereby distorting competition, which is another fundamental milestone. This contradiction is captured by the question, posed by Crouch (2009, p. 395) in his prominent article: “[Neoliberalism] is it about markets or giant firms?”

Beyond purely economic criteria, another light under which evaluating giant tech firms operating is political. In this respect, the words of Lindblom’s (1977: xxxvi-xxxvii) epitomize this idea: “the large private corporation fits oddly into democratic theory. Indeed, it does not fit”. Lobbying expenditure can be used as proxy to capture this additional dimension. As figure 5 indicates, the Big Five are spending whooping capital in lobbying, ranging from $6 to $22 million in 2018, and all of them are in the US top 1% of the lobbying expenditure distribution. Clearly, lobbying expenditure is an imperfect measure of the capacity of firms to influence the political process; but at the same time, it is natural to ask, why spending so much, if it does not procure any tangible benefit? Concerns over the political power of tech companies are captured by a recent poll made by the Pew Research Center, where 72% of Americans adults responded that social media companies have too much political influence (Anderson 2020). These figures highlight how large corporations are not only economic, but also political agents, thereby making it difficult to separate the political and the economic sphere when discussing their activities (Crouch, 2009). 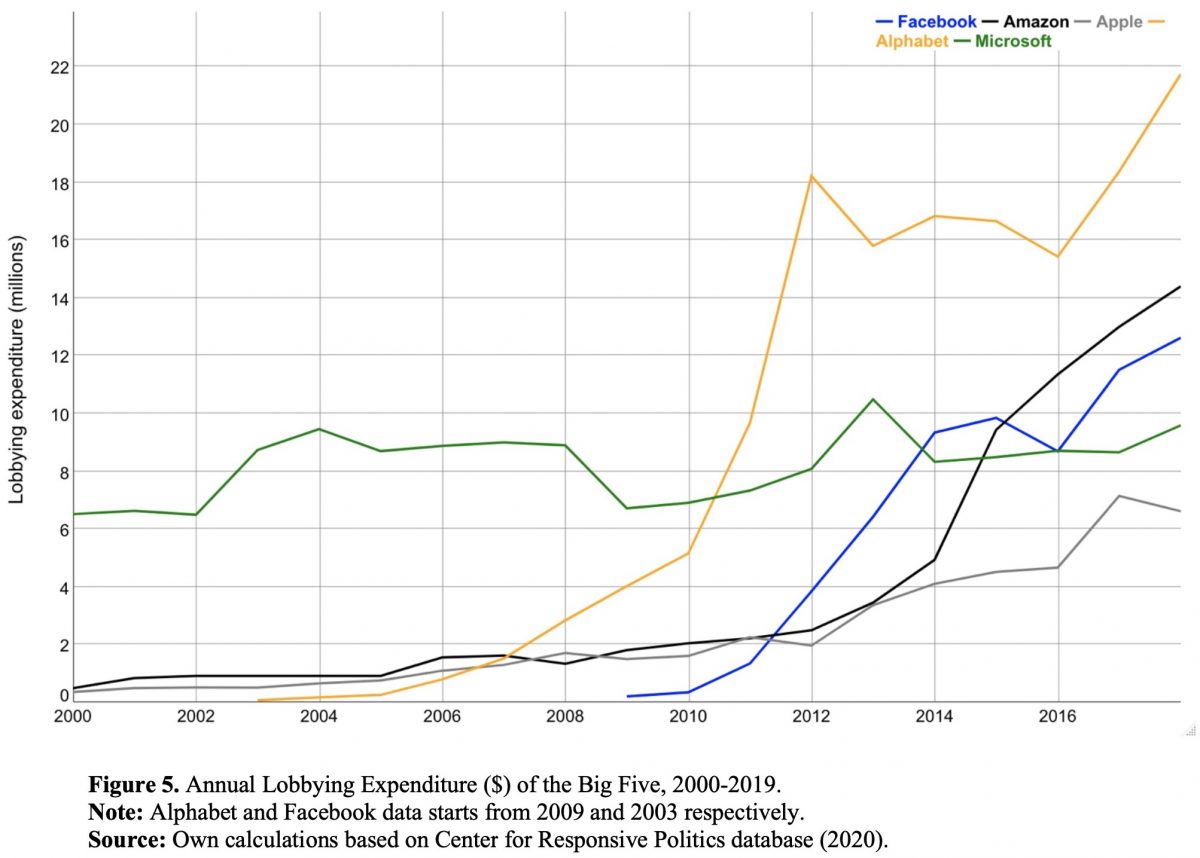 In this scenario, three main suggestions have been individuated for policymakers on both sides of the Atlantic. The first is not to focus on concentration per se but evaluating it within a broad set of indicators and factors, such as the creation of barriers preventing the entry of new competitors and the actual impact on consumers. Furthermore, lower competition, to some extent, can be tolerated if it is the result of superior productivity, and if it can foster innovation (Aghion and Howitt 1992). Secondly, there is the need to build transnational cooperation among regulators, as suggested by Büthe (2015). The rationale behind this argument is that these companies are acquiring an ever-increasing global dimension, the domestic regulator, even when its jurisdictional reach is large –as in the case of the US and Europe – and this may prove inadequate in a democratic context. Moreover, increasing cooperation between national regulators may result in a more homogenous enforcement of competition and antitrust policy, which is actually lacking at the moment. Finally, large corporations should be evaluated not only for their economic, but also political weight. The goal of regulators and policymakers, in this respect, should be minimising the preferential access to politics of tech giants given by their superior financial resources. This is not a matter of competition, but of democracy.

Büthe, T. (2015). “The politics of market competition: Trade and antitrust in a global economy”. In Martin, L. L., editor, The Oxford handbook of the political economy of international trade (pp. 213–232). Oxford University Press. 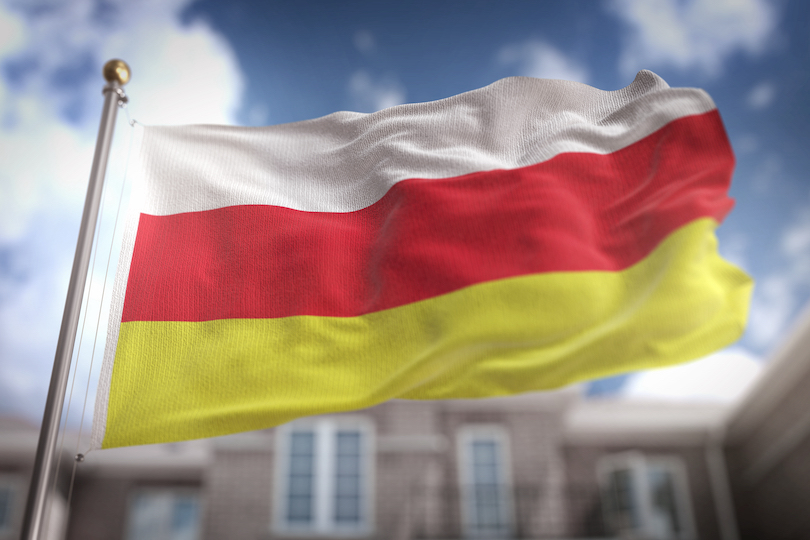 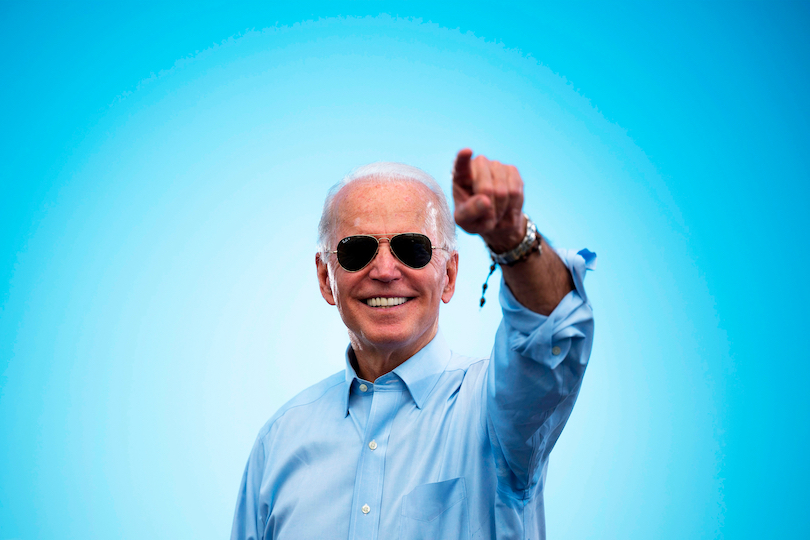 Opinion – Multilateralism and the Asia-Pacific under a Biden Presidency

Do You Have Any Controversial Opinions When It Comes To Travelling?