Of all the possible ways the Neanderthals may have gone extinct, it turns out that it may have been as simple as a common childhood affliction that ultimately spelled their doom.

Illness is part of being human, no matter how much we don’t like it. It helps build up our immune systems and makes us grateful when we are healthy.

Unfortunately, there are some illnesses that some humans can’t overcome, but we have survived as a species because most of us at least overcome the common stuff.

Neanderthals, however, were not so fortunate.

An ear infection is a common childhood malady that is perfectly treatable today, either through antibiotics or surgery. But 40,000 years ago, Neanderthals did not have the benefit of modern medicine and health care professionals, nor did they have the anatomical features of modern human adults that make ear infections more unlikely to develop. 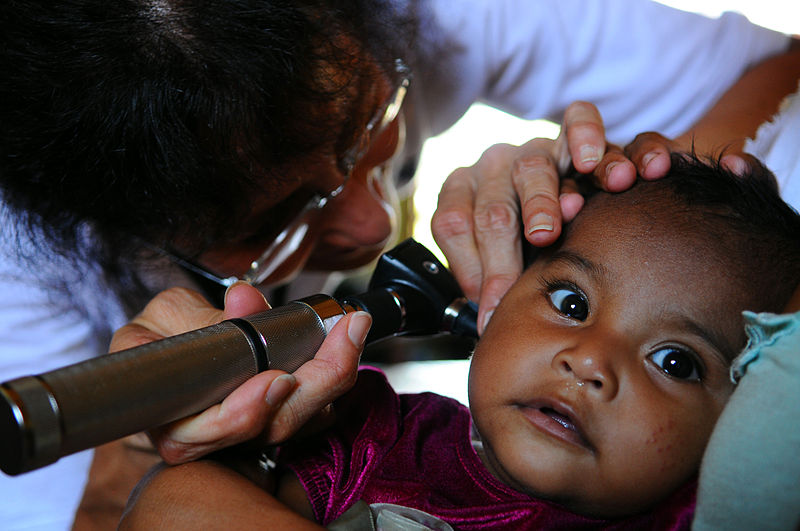 A medical volunteer checks a child for an ear infection. Neanderthals could have certainly used this tool 40,000 years ago. Image via Wikimedia.

In a new study published by the American Association for Anatomy, a team of researchers found that the structure of Neanderthal ears made them more susceptible to ear infections as adults.

According to the study:

Neanderthals are among the best studied and yet most enigmatic fossil human groups with aspects of their anatomy and functional morphology remaining poorly understood. We present the first anatomical reconstruction of the Neanderthal cartilaginous Eustachian tube (CET), a vital component of the upper respiratory tract and nexus for the middle ear and postnasal airway. The Eustachian (auditory, pharyngotympanic) tube, comprised of a bony and cartilaginous (CET) portion, is integral to normal physiological functions such as middle ear aeration and pressure equilibration. Findings indicate that Neanderthal tubal morphology may have predisposed them to high rates of middle ear disease (otitis media [OM]).

“It may sound far-fetched, but when we, for the first time, reconstructed the Eustachian tubes of Neanderthals, we discovered that they are remarkably similar to those of human infants,” Downstate Health Sciences University Associate Professor Samuel Márquez, Ph.D. said in a statement. “Middle ear infections are nearly ubiquitous among infants because the flat angle of an infant’s Eustachian tubes is prone to retain the otitis media bacteria that cause these infections – the same flat angle we found in Neanderthals.”

Anatomy of the human ear, including the Eustachian tube. Image via Wikimedia.

While the Eustachian tubes of Neanderthals remained flat and shortened into adulthood, human Eustachian tubes lengthen and the angle changes as infants grow up, reducing the chances of developing ear infections because ears are able to drain better.

Because Neanderthals did not develop the kind of ear drainage humans benefit from, they were more at risk of developing other common afflictions, thus compromising their immune systems. As a result, they were a more sickly species than us, which hurt their ability to compete with us for resources in a world where survival was already difficult and uncertain.

According to the study:

“In living humans, mechanical CET dysfunction underlies OM in infants and young children, with sequelae including hearing loss, meningitis, and pneumonia. Despite proven linkage of CET malfunction with OM, the role of CET morphology in Neanderthal health and disease remains unstudied. We reconstructed Neanderthal CET morphology, comparing their crania to a modern human growth series. Methods included geometric morphometrics and univariate measures among Procrustes‐fitted coordinates. Results showed Neanderthal adults exhibiting primitively tall and narrow nasopharynges with infant‐like horizontal CET and choanal orientation. As horizontal CET orientation is associated with increased OM incidence in infants and children until around age six, its appearance in Neanderthal adults strongly indicates persistence of high OM susceptibility at this time. This could have compromised fitness and disease load relative to sympatric modern humans, affecting Neanderthals’ ability to compete within their ecological niche, and potentially contributing to their rapid extinction.”

“It’s not just the threat of dying of an infection,” Dr. Márquez said. “If you are constantly ill, you would not be as fit and effective in competing with your Homo sapien cousins for food and other resources. In a world of survival of the fittest, it is no wonder that modern man, not Neanderthal, prevailed.”

Indeed, Neanderthals died out 40,000 years ago despite being able to make fire, hunt, manufacture jewelry and develop a unique culture of their own.

The team was able to discover this new anatomical information about Neanderthals by reconstructing their ears based on ear canal remains.

“The strength of the study lies in reconstructing the cartilaginous Eustachian tube,” noted child health specialist and Distinguished Professor and Chairman of Otolaryngology at SUNY Downstate Richard Rosenfeld, MD, MPH, MBA said. “This new and previously unknown understanding of middle ear function in Neanderthals is what allows us to make new inferences regarding the impact on their health and fitness.”

Not only does this new information help us understand Neanderthals and why they disappeared, but it also teaches us not to neglect even the simplest explanations to solve mysteries.

“Here is yet another intriguing twist on the ever-evolving Neanderthal story, this time involving a part of the body that researchers had almost entirely neglected,” American Museum of National History Curator Emeritus and paleoanthropologist Ian Tattersall, Ph.D. said. “It adds to our gradually emerging picture of the Neanderthals as very close relatives who nonetheless differed in crucial respects from modern man.”

Interestingly enough, ear canal remains also helped a separate team of researchers discover that Neanderthals easily developed a condition known today as swimmer’s ear. Neanderthals lived near the coastline, thus they utilized the ocean for food resources, which means they often dove under the water to gather seafood such as clams and shellfish. And because of this, they developed swimmer’s ear, which they would have been especially susceptible to developing because of their flat Eustachian tubes that had not lengthened by adulthood like our own.

Neanderthal ear canals that helped researchers discover their susceptibility to swimmer’s ear and ear infections. Image via PLOS ONE.

Clearly, modern humans had an advantage over the Neanderthals within our own ears that enabled us to grow out of developing childhood ear infections that could have resulted in other more major afflictions. Neanderthals were not as lucky, so they were less healthy.

Of course, they likely solved this ultimately by interbreeding with Homo sapiens, which is why Neanderthal DNA is still found in the human genome today. Had Neanderthals not mated with humans, they would have died out completely because of a childhood ear infection and other illnesses. Interbreeding also hastened their disappearance but helped them overcome these ear infections and avoid total extinction on a genetic level.

Related: Researchers says UV radiation caused by a polar shift may have taken out the Neanderthals

More about Neanderthals and how their DNA is with us today from SciShow: