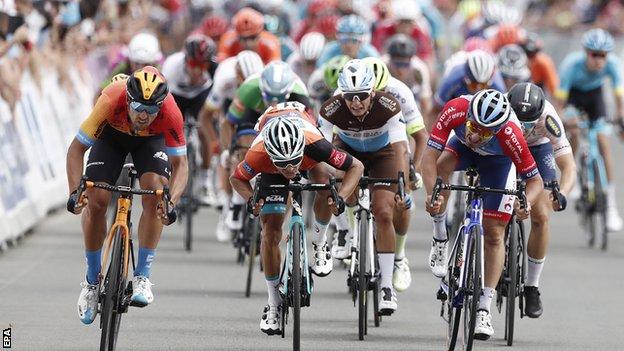 Colbrelli (left) leads home the field in the second stage

The 30-year-old triumphed after a bunch sprint following a 174.5km run from Carcassonne to Cap Decouverte.

Four-time Tour de France winner Froome, who suffered a serious crash last summer, is bidding to return to form in time for the start of the Tour on 29 August.

He faces competition for selection for Team Ineos from Bernal, who won last year's three-week race and is now ahead of Froome in this southern French region.

If he is selected by the powerful Team Ineos outfit, Froome will be seeking to become the fifth rider to win a record five Tours.

In stage one, Froome - Tour de France winner in 2013, 2015, 2016 and 2017 - was credited with the same time as winner Coquard after being held up by a crash which happened inside the final 3km of a designated sprint stage.

Monday's 163.5km third stage of the race, held in a region bordering the Pyrenees, contains a challenging conclusion, with some sections of the Col de Beyrede measured at a 17% incline.