If you love all kinds of space stuff, here's a video that you may be thrilled to listen to, even at night! NASA has recently uploaded the sound of 'Milky Way' from its data sonification technology. Who may have thought being in space is this so relaxing?

We all know what 'Milky Way' is in space. Or how does it look like based on pictures? But do you know what does it sounds like?

On Monday, Sept. 22, the U.S. National Aeronautics and Space Administration (NASA) uploads a video representing how the 'Milky Way' sounds like.

As explained, the space agency already had thousands of digital data captured by telescopes, turned into images. It's amazing how Milky Way looks like.

However, astronomers want to find out more in-depth information about our galaxy, including how it sounds like. With the help of 'data sonification,' or the process that translates data into sound, NASA was able to recreate how the galaxy sounds like if you're close to it.

Here's the final output of that project:

Is there nothing more relaxing than that? Interestingly, a lot of Twitter users also find the video so heavenly.

How did they done it? 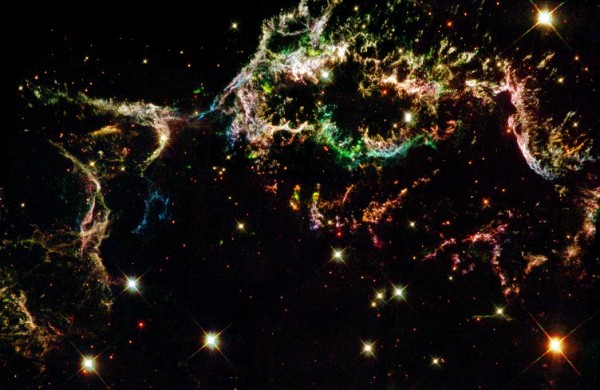 (Photo : Photo by NASA/Getty Images)
An image of a Cas A supernova reveals the remnants of a section of the upper rim of the youngest known supervova identified in our Milky Way galaxy. Dozens of tiny clumps near the top of the image are actually small fragments of the star and each clump is approximately ten times larger than the diameter of our solar system. The varying colors of the supernova are caused by glowing atoms.

As explained, the video was an output of data sonification technology.

NASA collected the images of the Milky Way in different lights. Then begins translation on the left side of the image and moves to the right, with the sounds representing the position and brightness of the sources.

The light of objects located towards the top of the image are heard as higher pitches, while the intensity of the light controls the volume.

Stars and compact sources are converted to individual notes while extended gas and dust clouds produce an evolving drone. The crescendo (the highest tune) happens when reaching the bright region to the lower right of the image.

And that how it's done!

What does 'Milky Way' sounds like here on Earth?

ALSO READ: LOOK: Bizarre Cold Gas Shooting on the Milky Way is Key to New Star Formations in the Galaxy!