Today, we marvel at creatures such as crocodiles and Komodo Dragons, but they would be even more fearsome if they had giant heads. And it turns out that giant-headed reptiles once roamed the Earth.

In the aftermath of mass extinction, apex reptilian predators with disproportionately large heads inherited dominion over the planet. This family of creatures is known as Erythrosuchids. Within this family is the clan of archosauromorphs, which includes two species of Garjainia, a reptile that walked on four legs similar to the way crocodiles and Komodo Dragons walk in the present day. The two species are known as Garjainia prima, the remains of which were found in South Africa, and Vjushkovia triplicostata, the remains of which were found in Russia.

We know a lot about Garjainia prima because scientists have conducted multiple studies focusing on it, but for some reason, they largely ignored V. triplicostata. And so, Professor Richard Butler of the University of Birmingham in the United Kingdom put together a team to study the creature and made some fascinating observations. The most interesting discovery, of course, is that the species had unusually large heads that were out of proportion with the rest of their bodies.

According to the study as published by the Royal Society:

Erythrosuchids are often described as possessing disproportionately large heads (e.g. [6,8–10,18,34]), but this trait has never been explored quantitatively. In order to explore relative head size in erythrosuchids in more detail, we collected data on basal skull length (premaxilla to quadrate) and femur length across tetrapods, with a particular focus on early archosauromorphs. Femoral length was chosen as a proxy for overall body size, in line with many previous studies. 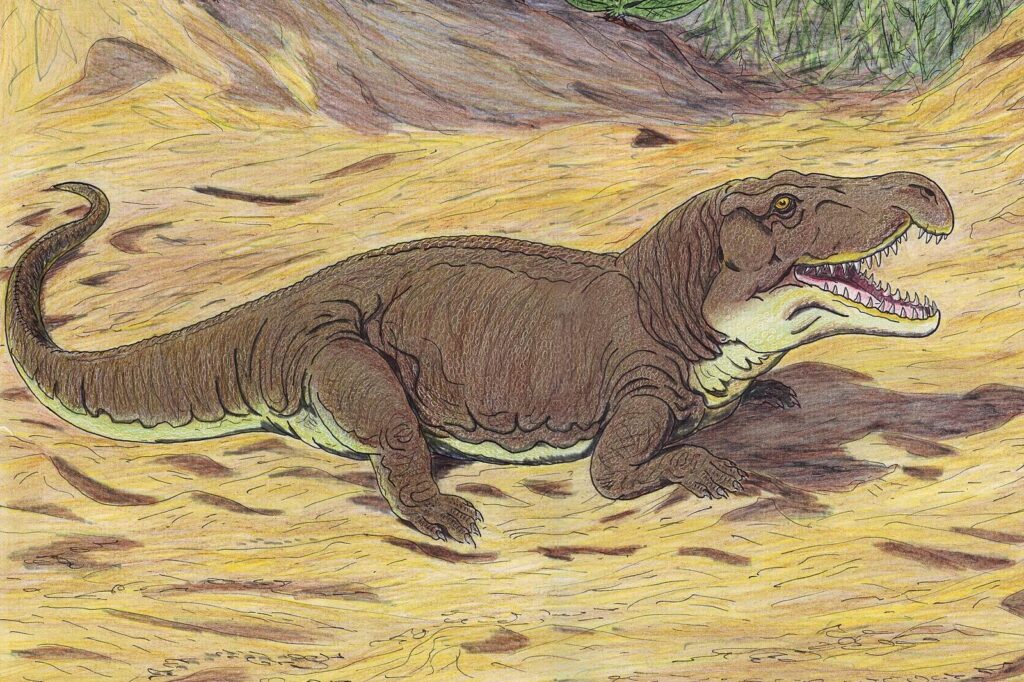 The team studied skull size in relation to femur size, which can tell us about how big or small an animal’s body was, just like how human femurs can be used to determine height.

And the big head trait seems to have been a key feature of most members of the Erythrosuchids family.

The study concluded that giant heads may have developed to aid predators in catching and eating prey, especially larger prey.

These results provide support for the generalization that the heads of erythrosuchids are disproportionately large relative to other groups of archosauromorphs, but also suggest that this feature is not unique to erythrosuchids but characterizes a broader grouping of early archosauriforms, including proterosuchids. The enlarged heads of proterosuchids and erythrosuchids were acquired coincident with increases in overall body size, and anatomical features related to carnivorous adaptations such as serrated teeth. The evolution of large heads in erythrosuchids and other early archosauriforms might therefore be linked to these groups invading hypercarnivorous niches following the Permo-Triassic mass extinction, although further exploration of this hypothesis using functional morphological approaches is warranted.

Another depiction of the Garjainia featuring a disproportionately larger head. Image via Wikimedia.

However, Butler cautioned that this is only a hypothesis for the time being.

“We don’t know for sure why this was the case, but we hypothesize that it might have been linked to their role as the top predators in a number of Triassic ecosystems: having a big, powerful head and bite is likely to be useful in capturing prey,” he told Newsweek in an interview. “Hypercarnivores are animals with diets almost exclusively composed of meat. We hypothesize that large predators at the top of food chains might have proportionately larger and more powerful heads in order to help in capturing prey.”

These creatures had heads disproportionately bigger than even most dinosaurs. We all know that Tyrannosaurus rex had a large head and tiny arms, making it a weird reptile in its own right. But Garjainia prima and V. triplicostata had giant heads and smaller bodies overall. 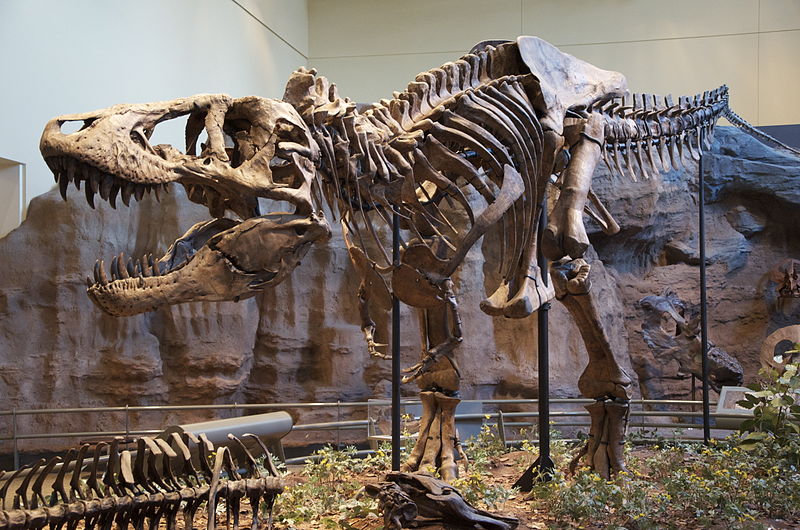 The T-rex had a large head and disproportionately small arms. Image via Wikimedia.

“These are bizarre animals, but much about their biology remains unstudied,” Butler said. “They presumably must have had very powerful neck muscles to support such a massive head, but detailed studies of their muscles have not yet been done.”

Jawbone and teeth of the V. triplicostata. Image via Royal Society.

Indeed, one would certainly hope these creatures had the muscle to support their heads. Or else they would have been sitting ducks for other predators because their heads would have weighed them down and kept them from defending themselves, making them less of a threat and not an apex predator.

That being said, Butler and his team intend on studying the anatomy to make further hypotheses about the creature.

“We’re working on the rest of the skeleton (the postcranial skeleton) at the moment, aiming to understand its anatomy and reconstruct muscles,” he said. “Longer term we’d like to understand more about the biology of these weird animals, through using approaches like computer modeling to understand how their skulls functioned.”

Learning more about these creatures will undoubtedly help us learn much more about living reptiles and how they function. Crocodiles and Komodo Dragons are about the closest this world has to dinosaurs today unless you count birds, which are not nearly as scary looking and fearsome. We certainly don’t fear being killed and eaten by a bird, even the largest of them. But crocodiles and Komodo Dragons have attacked and even eaten humans.

Komodo Dragons have sharp teeth and a poisonous bite that can kill a human in hours. These attacks are rare. The reptile weighs in at 150 pounds and can grow to 10 feet in length. They ambush and bite their prey, and then proceed to stalk it until it dies before feasting.

The Komodo Dragon is one of the largest lizards walking the Earth today and is similar to the Garjainia giant-headed lizards of the Triassic. Image via Wikimedia.

Crocodiles are also ambushing predators, but while Komodo Dragons are proficient hunters on land, crocodiles operate in the water, waiting for prey to come to the water’s edge before leaping out and pulling their prey under the surface, which they can easily do because they have the strongest bite on the planet. 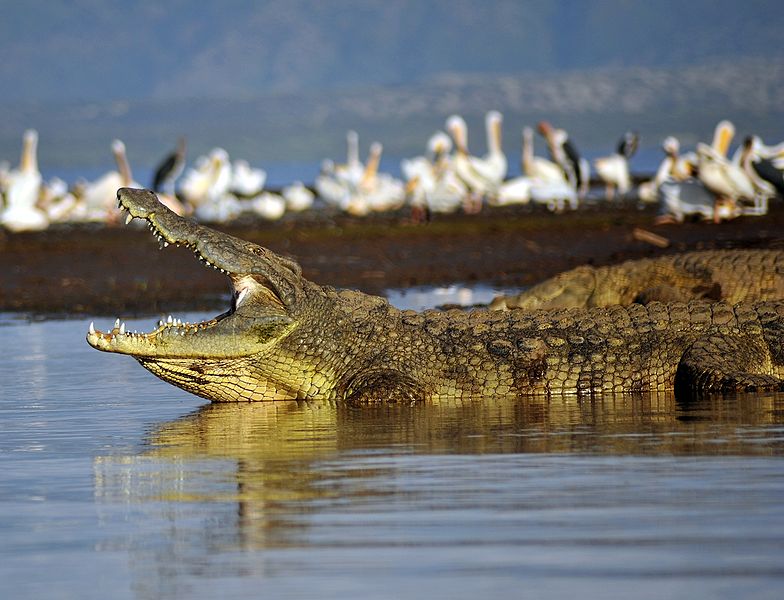 The crocodile is also somewhat similar to the Garjainia species. Image via Wikimedia.

Clearly, the ancient Triassic reptiles were more like Komodo Dragons because they hunted on lands, but they may have likely exhibited the bite strength of a crocodile, allowing them to crush and hold on to their prey, giving the creature the best traits of both.

Perhaps genetic studies can further connect the Garjainia prima and V. triplicostata to crocodiles and Komodo Dragons by revealing even more similarities and differences. But one thing is for certain. It’s a good thing giant-headed reptiles are not roaming around today because that would be terrifying.