Salango is located on the coast of central Ecuador, and archaeologists recently made an astonishing find there: Two infants who had been buried approximately 2,100 years ago wearing “helmets” made from the skulls of other children.

According to Live Science:

“The archaeologists who excavated the burials between 2014 and 2016 recently published the details of their findings in the journal Latin American Antiquity.

“The team says this is the only known case in which children’s skulls were used as helmets for infants being buried. The scientists don’t know what killed the infants and children.”

What exactly is the meaning of this bizarre discovery? Why would children be buried wearing the skulls of other children? And what killed these children in the first place?

The questions were almost endless, but now we’re finally starting to get some answers to help explain what was found in Ecuador.

Though there’s certainly nothing unusual about unearthing skulls when excavating a burial site, in South America those skulls are usually the remains of adults who died in battle. Children are not usually the victims, Ancient Origins notes:

“The discovery of children is much less common, which makes these two children extra special.” 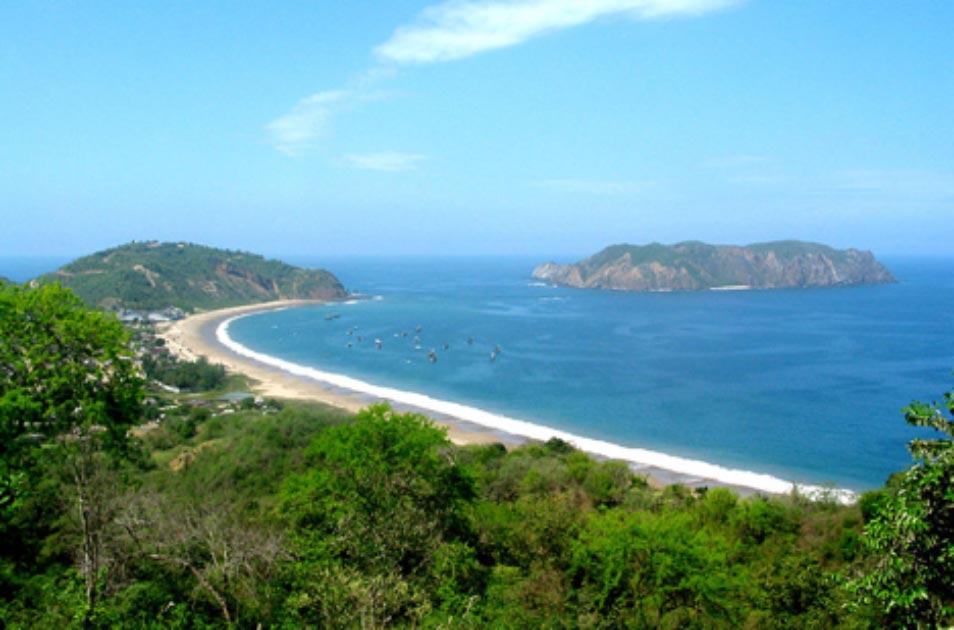 A closer look at the children’s skulls provided more information about the “helmeted” children.

One of the infants died at 18 months old. The second was 6 to 9 months old at death, and both had the skull helmets:

“(The older child) was discovered wearing the modified cranium of a 4-12 year old juvenile in a ‘helmet-like’ fashion around its own head. The second infant … was found with a skull helmet made from another infant who had died between 2-12 years old.”

But what does it mean that the children had these skull helmets attached to them? 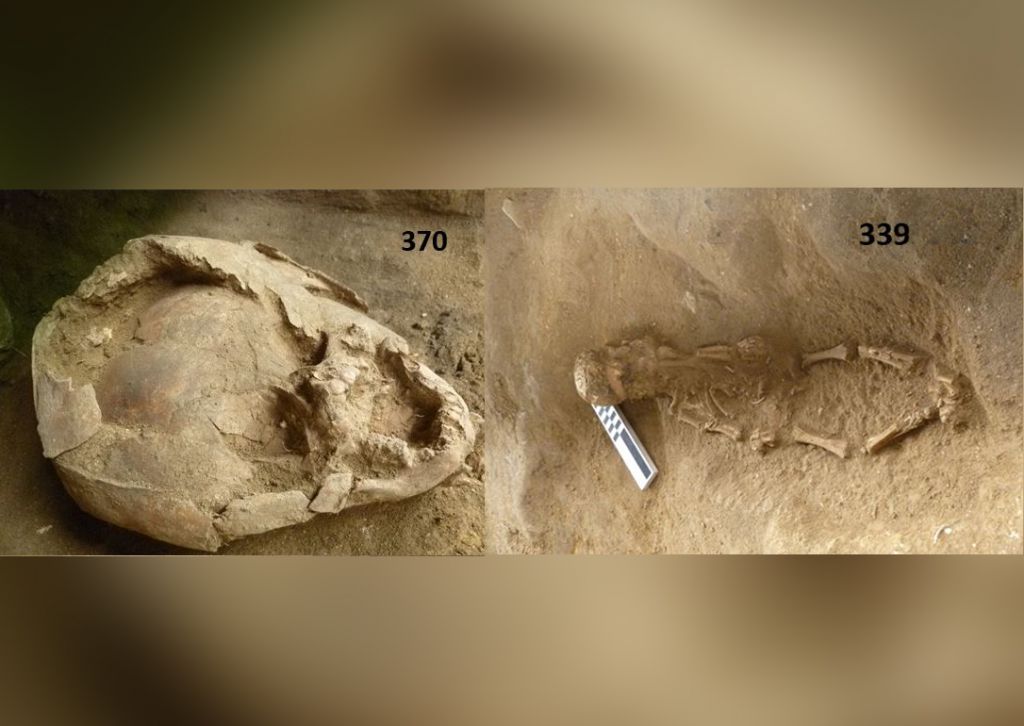 Discovery of the “helmeted” infants has led to endless questions. (Via Sarah Jeungst/UNC Charlotte)

Sara Juengst of the University of North Carolina, Charlotte, along with others on the team that found the skulls in Ecuador, came up with a fascinating theory regarding the skull helmets:

“Juengst and colleagues suggest these unusual symbolic burials at Salango might have been an attempt to ensure the protection of what the researchers called ‘pre-social and wild’ souls. And the act of burying their children with carved stone ancestor figurines may have been a way of ‘further empowering” their heads, providing protection for the prematurely deceased children.'”

Related: The face of a man found in a ‘six-headed burial’ in Scotland is revealed

And then there’s the matter of how the skull helmets were attached to the deceased infants, and it’s certainly not for the fainthearted, Live Science notes:

“One infant’s ‘face looked through and out of the cranial vault’ — the space in the skull that holds the brain — the archaeologists wrote.” 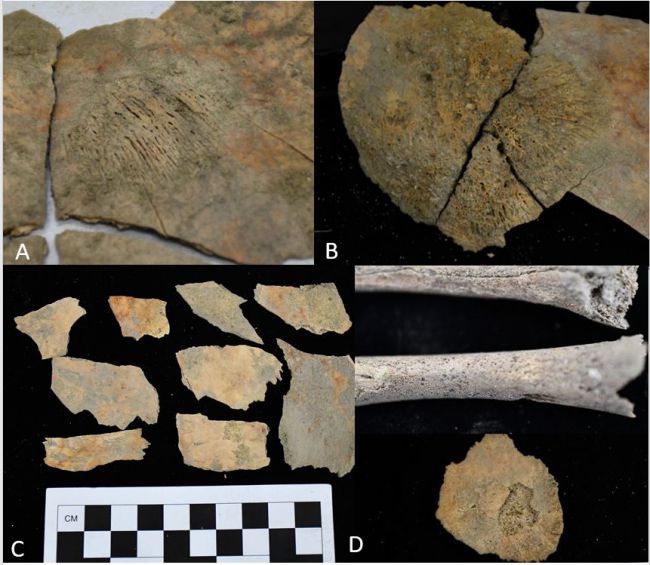 Lesions were found on the remains of both of the infants (a and d), suggesting the baby suffered some kind of bodily stress, perhaps from malnutrition. One of the skull helmets can be seen in photos b and c (Via Sarah Jeungst/UNC Charlotte)

Related: Two-Headed Mummy of Ancient Egyptian Princess And a Crocodile Revealed For The First Time In Public

The question that remains is what exactly killed these young children.

Prior studies in the area have been able to determine that a volcanic eruption covered the area in ash shortly before the children were buried. And that has led some to suggest that may have had a dramatic impact on the entire region around Solango:

“‘This eruption may have affected food production, and the newly discovered bones suggest the infants and children suffered from malnutrition,’ the researchers said.

“It’s possible that ‘the treatment of the two infants was part of a larger, complex ritual response to environmental consequences of the eruption,’ the archaeologists wrote, noting that ‘more evidence is needed to confirm this.'”

However, given the history of ancient South America, a darker explanation for the skull helmets may also be plausible.

Just two years ago, a burial site in Peru was unearthed that contained the remains of 140 children who had been ritually sacrificed in some sort of bizarre appeasement of deities the Peruvians worshiped: 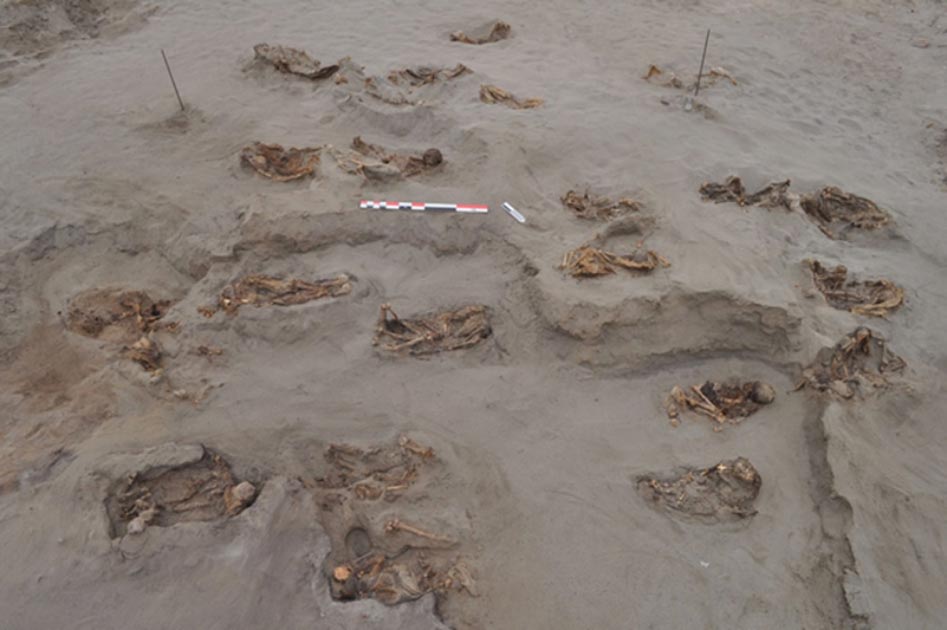 The Peruvian burial site where hundreds of children’s bodies were unearthed (Via PLOS.org)

As with the bodies found the Peruvian mass grave, a great deal more research is needed to fully explain the meaning of the helmeted skulls in Ecuador:

“Juengst noted that other tests, such as those using DNA and strontium isotopes (variations of an element with different numbers of neutrons), may help to identify the owner of the bones.”

But all of the research in the world may never completely explain exactly what thought process went into placing skulls atop the heads of deceased children prior to burial. As with many things from the ancient world, some secrets are never revealed.

Related: Do descendants of the mysterious Green Children of Woolpit exist today?

For more on the subject of cranial modification in ancient times, watch this video: