Chinese telecom giant Huawei is cutting off its nine-year sponsorship deal with Australian rugby league team Canberra Raiders. The announcement came on Monday, August 31, despite the renewal of the deal in 2019 for another two years.

According to a Washington Times report, the company's support on the Raiders will be terminated as soon as the current National Rugby League season ends on October 25.

Huawei blamed the "continued negative business environment," which has brought a larger impact on its revenue stream. "Therefore, we will have to terminate our major sponsorship of the Raiders at the end of the 2020 season," a Huawei statement said. 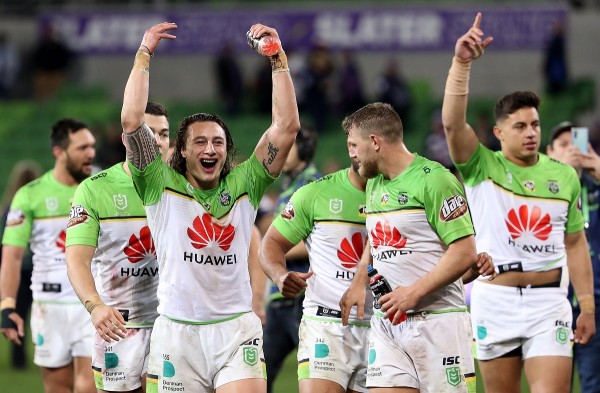 (Photo : Robert Cianflone/Getty Images)
MELBOURNE, AUSTRALIA - AUGUST 17: The Raiders celebrate after they defeated the Storm during the round 22 NRL match between the Melbourne Storm and the Canberra Raiders at AAMI Park on August 17, 2019 in Melbourne, Australia.

Huawei is the world's largest maker of switching gear and a major smartphone manufacturer. Australia has banned the company from involvement in national communication infrastructure as China been pressuring the country-continent to reverse its policy.

Huawei rolled out its decision to sponsor the team from the Australian capital Canberra in 2012 just months after the government banned the company in the National Broadband Network in 2011. The Raiders is the only team in the National Rugby League playing for Canberra where the central government and national policy-making is located.

The Raiders was Huawei's first major sponsorship in global sports scene. In the past nine years, "Huawei has felt very much part of the Raiders family," which has been a company highlight despite some difficult times.

While Huawei Australia's Chief Corporate Officer Jeremy Mitchell noted that it was "so disappointing that it has ended this way," the company is proud of its Raiders sponsorship and the small role it has played in the "great NRL club."

The company chief also said that while they want to continue with the partnership, "we just can't financially support it any longer."

Read also: China Says Huawei is 'the Future' But Its Stature is Actually Shaky Even in Southeast Asia [Reports]

Aside from the Australia's banning Huawei in its nationwide construction of 5G infrastructure, the Chinese company is facing bigger pressures in the United States.

On August 17, the Commerce Department announced new restrictions on Huawei's buying ability for semiconductor chips, which is used to store computer data. This was the recent move to paralyze the company's trade deals in the U.S.

Back in May, the U.S. government put Huawei on a trade blacklist, although it did not affect most foreign-produced chips. Later, U.S. extended the ban to cover all semiconductors that use U.S. technology and according to Huawei's specifications.

However, the recent rules impose a "blanket ban" on semiconductor sales to the tech company, prohibiting the sale of any chips made with U.S. technology, regardless if these chips are tailored to Huawei's specifications.

Analysts believe these actions from the government will put Huawei's market survival at risk.

Read also: Why are US Parts Still Used in Huawei Smartphones Despite Blacklisting?