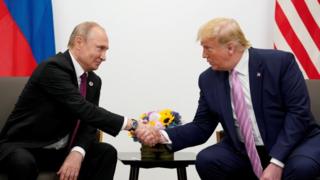 The UK and Canada have opposed Russia's return to the G7, deepening a rift over US President Donald Trump's wish for the country to rejoin.

Mr Trump said on Saturday he would postpone the G7 summit scheduled to take place this month until September.

The president said the G7's "outdated group of countries" should be expanded to include others, including Russia.

On Sunday, Mr Trump told Russian President Vladimir Putin of his plan to invite him to the summit.

The White House said making "progress toward convening the G7" with Russia was among the topics the leaders discussed in a phone call.

The G7 summit, which the US hosts this year, convenes the leaders of Canada, France, Germany, Italy, Japan and the UK to discuss matters of co-operation.

But Mr Trump's invitation to Mr Putin has drawn the ire of the UK and Canada, whose leaders said on Sunday they would not support Russia's readmission to the group.

Russia was expelled from the group - previously known as the G8 - in 2014 in response to its annexation of Crimea.

"Russia was excluded from the G7 after it invaded Crimea a number of years ago, and its continued disrespect and flaunting of international rules and norms is why it remains outside of the G7, and it will continue to remain out," Canada's Prime Minister Justin Trudeau said at a news conference.

Earlier, a spokesman for the UK Prime Minister Boris Johnson said he would veto any proposal to allow Russia to rejoin the group.

Unless Russia ceases its "aggressive and destabilising activity", the UK would not support the country's readmission to the group, Mr Johnson's spokesman said.

"Russia was removed from the G7 group of nations following its [2014] annexation of Crimea and we are yet to see evidence of changed behaviour which would justify its readmittance," the spokesman told reporters.

Neither the UK or Canadian position rules out Mr Putin's attendance of the summit in the US.

Though representatives of non-G7 members have attended the group's summits before, Mr Putin's presence could prove contentious.

In recent years, the UK has had an acrimonious relationship with Russia, which it blamed for a nerve agent attack on a former Russian spy in Salisbury, England in 2018.

Despite opposition from other G7 members, Mr Trump has repeatedly expressed his support for Russia's return to the group. 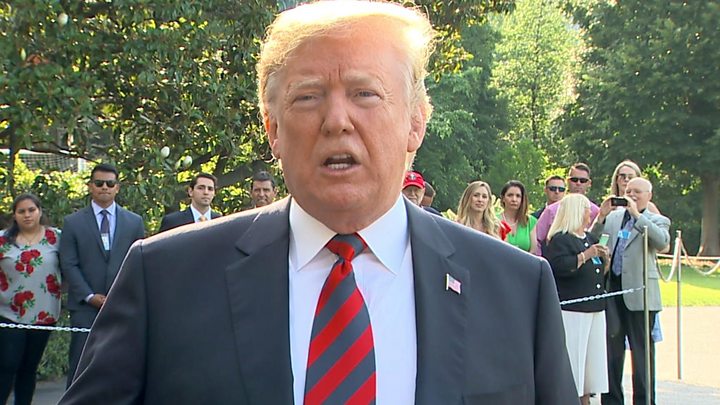 Media captionTrump to G7: "They should let Russia come back in"

Announcing the delay of this year's G7 summit on Saturday, Mr Trump echoed that sentiment.

He said he did not feel the group "properly represents what's going on in the world", suggesting Russia, South Korea, Australia and India should be invited.

The leaders of South Korea and Australia have expressed interest in attending the summit in the US.

Last week, German Chancellor Angela Merkel rejected the president's invitation to attend a summit in person because of the coronavirus pandemic.

The G7 (or Group of Seven) is an organisation made up of the world's seven largest so-called advanced economies.

The leaders of these countries meet annually at summits to discuss issues of global governance, including climate change, security and the economy.

The group regards itself as "a community of values", with freedom and human rights, democracy and the rule of law, and prosperity and sustainable development as its key principles.