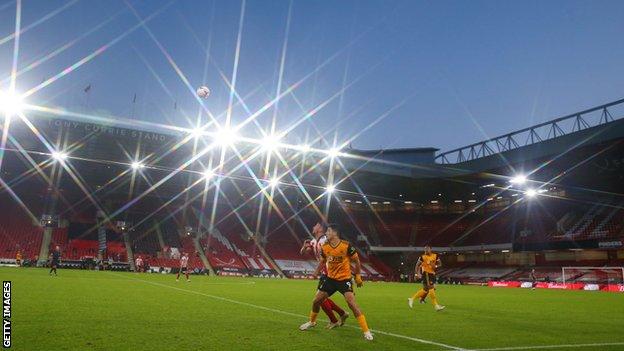 Premier League games continue to be played behind closed doors

The English Football League will continue to stage pilots with up to 1,000 fans at matches this weekend, following approval from the government.

Championship, League One and League Two clubs were asked to put in requests by Tuesday in order for their plans to be signed off in time.

However, a decision is unlikely to be reached this week on the planned return of spectators to sport from 1 October.

The English Football League (EFL) said the pilots were an "important step" for fans' safe return.

Those in local lockdown areas were told they would not receive permission to take part in the test events.

In a letter to clubs on Tuesday, the EFL's head of policy John Nagle said: "We cannot guarantee at this stage that all clubs that would like to stage a pilot will be given permission to do so, as only a limited number will be approved.

"We are still in discussions with regard to pilot matches on other dates."

Nagle said that "the next 48 hours are likely to be critical in terms of determining the direction of travel" regarding the potential return of supporters.

He asked clubs to lobby local MPs, urging them to "make representations on behalf of you, their local club, to government" and added that football was facing "an impending financial crisis as a result of the Covid-19 pandemic".

Nagle also said key messages clubs should highlight to MPs were that: "Football now wishes to see the government give the green light to the return of crowds from the beginning of October as originally planned, as will be the case in many other European countries including Belgium, Germany, France, Denmark, Austria, Poland and Switzerland.

"Failure to do so, or to at least provide any credible roadmap back to the return of fans in the near future, could have catastrophic consequences for many football clubs and the communities they represent."

He apologised for the "late notice and short timescales" but said: "We are very much in the government's hands on this one."

An EFL spokesman said it remained "in discussions with the government about the pilot programme which may include a limited number of further pilot matches during September with capacity limited to 1,000".

"The League is clear in its view that social distancing can be applied safely in football stadia and that having crowds at matches is an absolutely essential part of helping to protect club finances, which remain under extreme pressure," they added.

"Therefore, the successful delivery of further pilots will be an important step towards getting larger numbers of fans into grounds safely."

Last week, the government restricted pilot events to 1,000 spectators after a rise in coronavirus cases, and said plans for grounds to be up to a third full from 1 October would be reviewed.

The Premier League has already written to the government over pilot plans and says around £100m per month will be lost by clubs across the leagues while matches continue behind closed doors.

It is one of a number of sports bodies to have voiced concerns at the financial impact of an extended period with empty venues.

Nigel Huddleston, Minister for Sport, Tourism and Heritage, has written to former sports minister Tracey Crouch MP to state that despite changes to Covid-19 restrictions, the UK government is hopeful fans can attend events under socially distanced conditions from 1 October.

National League chairman Brian Barwick has warned that clubs risk suffering "severe economic hardship" and players will go unpaid unless the government allows fans into its stadiums next month.

Barwick has written to Dowden to express his concern.

"Unlike the upper echelons of English professional football, the National League restart depends upon crowds being allowed back in stadiums as live attendance is by far the largest source of income," he said.

"If a decision is made to delay or to cancel the return of fans, it is feared many players and staff may go unpaid due to the shortfall in match day income and the furlough scheme being discontinued.

"Furthermore, in the absence of a credible pathway for the return of spectators, it is feared that clubs could suffer severe economic hardship, and that community assets may fall out of use."

'We wouldn't last the season'

Meanwhile, a report in the Times on Tuesday claims attendances could be restricted to between 1,000 and 2,500 from 1 October, depending on the coronavirus infection rate.

Gloucester chief executive Lance Bradley told BBC Radio 4 that level of restriction would be "a disaster" if put in place for the remainder of the season.

"We simply have to get fans back in reasonable numbers as soon as possible to ensure the game survives," said Bradley. "We can't keep going losing money with 1,000 or 2,000 fans.

"In the end, that would be a disaster. There are clubs in a worse position than us but we would find it very difficult.

"We wouldn't be able to make it through the season if we were only allowed crowds of 2,500."

'The consequences could be very serious for Silverstone'

Silverstone managing director Stuart Pringle said the track needs to get a full crowd back for next summer's British Grand Prix as a reduced capacity is not sustainable for its business.

"We have had a truly dreadful 2020. We are burning through cash at an alarming rate. You cannot run a 550 acre site with no revenue coming in or very, very reduced revenue.

"If we are not hitting a level that is very, very far above 50%, then we are not even breaking even. I don't want to run with a reduced audience next year because it will simply make us lose more money, quicker - and we cannot sustain that.

"If we are not there, Silverstone will be in a dire place."

Football Daily: Who impressed on the opening weekend?Thriller Podcasts: What they can tell us about the future

Hayward set to return to Celtics... 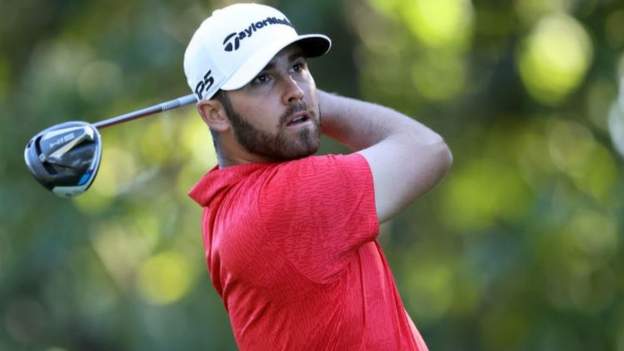 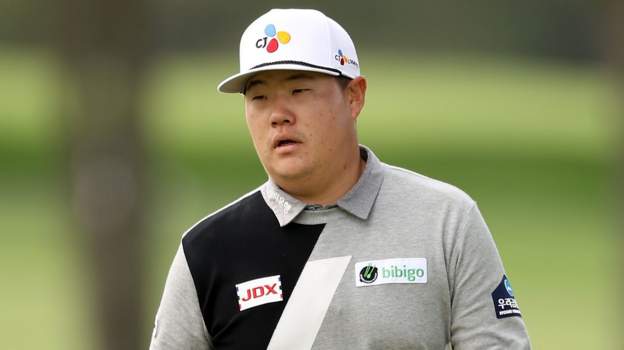