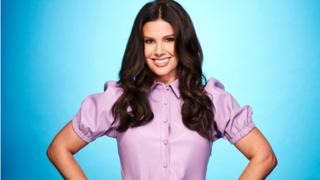 Rebekah Vardy is the latest contestant to be announced for the new series of ITV's Dancing on Ice.

Vardy, who appeared on I'm A Celebrity... Get Me Out of Here! in 2017, said her footballer husband Jamie "thinks it's such a brilliant idea".

Vardy has been in the headlines over the past year for her row with Coleen Rooney, wife of Wayne.

The row blew up after Coleen Rooney claimed stories leaked to a tabloid newspaper could only have been seen by Rebekah Vardy's social media account. Vardy denies all allegations against her and is currently suing Rooney for defamation.

She told GMB: "I understand people think it's ridiculous but what was I meant to do? I need to clear my name... and I will do whatever that takes."

She added: "I hope it's resolved soon. I find it really tough but to be fair, in comparison to what some people have gone through with Covid and things, it's incomparable."

She will put that to one side when she takes to the ice when the new series starts in January.

She told GMB her dad had taught her to skate when she was seven, but that she now only skates at Christmas with her children.

Leicester City striker Jamie is "really looking forward to watching me and says he hopes I don't fall over too much", she added.

With their professional partners, they will hope to impress Dancing on Ice's judges - Torvill and Dean, John Barrowman and Ashley Banjo - and viewers at home.

Phillip Schofield and Holly Willoughby will return to host the show. The last series was won by actor Joe Swash.

Gwen Stefani’s shady reaction to ‘Voice’ contestant: ‘Some of those ‘90s songs are like a trigger for me’