Archaeologists were recently working in the ancient Turkish city of Çatalhöyük when they happened upon a startling sight: Human teeth that had been modified in an odd manner.

According to The Daily Mail:

“A group of archaeologists discovered three preserved human teeth while on a dig at the Neolithic proto-city, a UNESCO world heritage site.

“The teeth date back to approximately 6500 BC and two showed signs of having been ground into a conical shape using a microdrill, then drilled so they could be placed on a string and used as jewelry.”

Though it’s hardly a household name, Çatalhöyük –which is located in southern Turkey — is believed to have been one of the first cities in the world and has been designated as a UNESCO World Heritage site, Ancient Origins notes:

“It flourished from 7000 to 5900 BC, and based on the surviving structures experts believe it was a very egalitarian society, which at its peak was home to at least 8000 inhabitants.

“Çatalhöyük had a very well-ordered society and the inhabitants buried their dead inside the city. It appears that dwindling natural resources led to conflicts and the ultimate abandonment of the proto-city.” 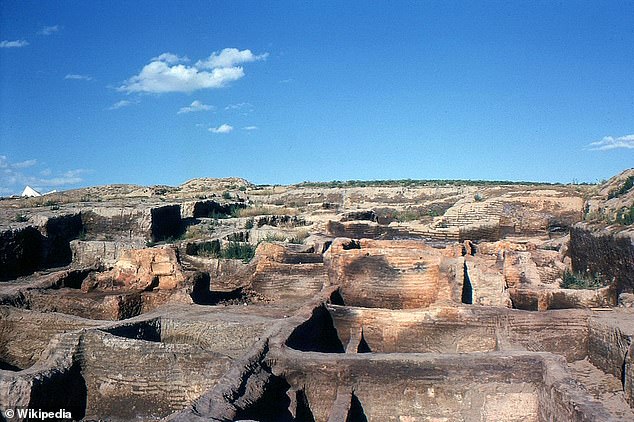 Çatalhöyük is one of the earliest examples of dense urban living, with more than 8,000 residents living in tightly packed quarters (Via Wikipedia)

Initially, researchers were unsure what to make of teeth they found at the dig site, two of which showed signs of having been ground in a cone shape and then drilled so they could be placed on a string as jewelry. It’s believed the teeth were removed after death and came from middle-aged adults, Forbes reports:

“Their analysis suggests that the roots of two of the teeth were mechanically created using a cone-shaped microdrill. ‘The perforation of the human teeth was a task performed by individuals who possessed the required knowledge of technological gestures, material properties, and appropriate tool kits,’ the archaeologists write. They also discovered that at least two of the teeth have patterns of wear ‘suggesting extended use as ornaments.'”

The challenge was to determine exactly how the teeth were fashioned into jewelry, according to Scott Haddow, from the University of Copenhagen. His team conducted radiographic and macroscopic tests in the hope of proving whether the holes in the teeth were man-made or the result of some natural process.

When the results of those tests came back, Haddow and his fellow researchers were stunned to find out that the teeth had indeed been modified by humans:

“The holes ‘were both hourglass-shaped – consistent with biconical drilling’ and were clearly modified, reports Science Alert. Biconical drilling refers to when a craftsperson drills a hole from both the top and bottom of an item. The Republic states that ‘the drill-work was probably done by trained professionals who understood the work.'”

The teeth were also coated in a “greasy sheen” which indicates that they had been in contact with some sort of soft material, such as textiles:

“It may also be a result of exposure to human flesh. However, when it came to the third tooth, the hole may have been a result of a cavity and not the modification of a Neolithic craftsperson.

Clearly, we can surmise that ancient people had no way to care for their teeth. It’s not believed that was any dental health regimen for those who lived thousands of years ago. So perhaps people decided to make the most of a bad situation by turning discarded teeth into something decorative.

But the researchers also speculate that wearing teeth may have had a less practical and more spiritual purpose:

“‘Taken together, these observations militate against a solely aesthetic purpose for the practice of tooth modification observed at Çatalhöyük,’ the researchers wrote.

“‘Rather, these material choices – and their rarity overall – suggest a deeper symbolic value, the full meaning of which cannot be fully appreciated at present.'”

Here’s more on the ancient city of Çatalhöyük: